It was very difficult to choose one feature photo for this weeks IPC Apps Uncovered.

Such a wide range of styles that caught my attention. It was such a pleasure to consider all the contributions.
The lead image comes from Kate Zari Roberts, I must confess I am bias towards her vision when it comes to seeing the beauty in trees.

She inspired me to see more with regards to what can easily be overlooked.

This piece she titled; A soft Fall morning, is no doubt a work of art meant for walls.

Spotlight on Tuba Korhan. The stories our hands tell.

Thank you all for your contributions and making it easy for us to publish this article. Adding your backstories and enabling share really helps. 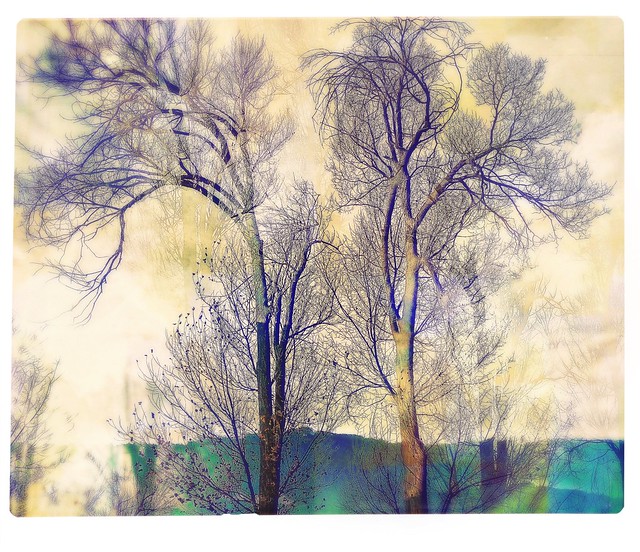 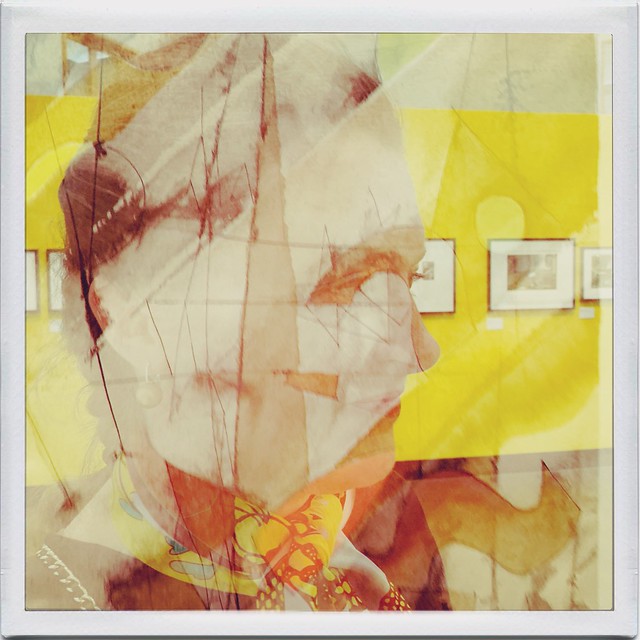 This photo was taken with the iPhoneXS for my 365 day project using only Hipstamatic photos straight out of the camera. The Hipstamatic app has a slider to make a double-exposure when set to classic view. I first photographed the painting and then double-exposed it with the woman in profile in front of the pictures in the background. It takes many tries to get a result I like with the painting landing just right over the woman’s head so her silhouette is recognizable. 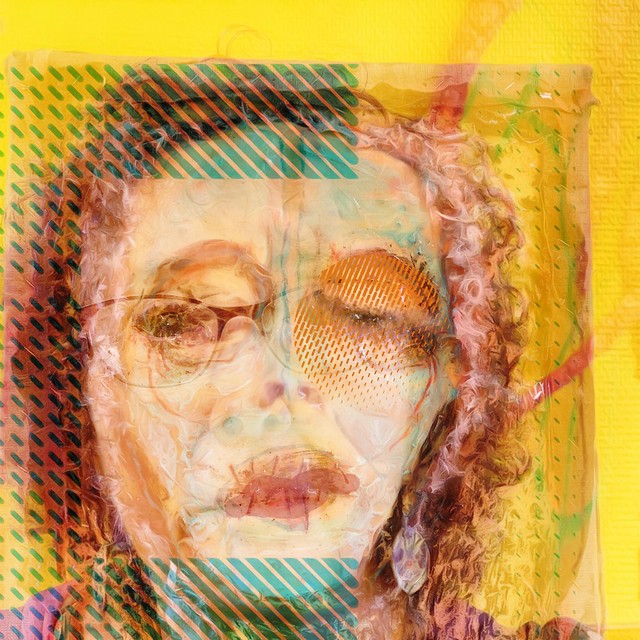 I saw this painted head at a Graffiti exhibit and double-exposed it with a selfie of me. I then processed it with the tangent app to add the geometric patterns. The final step was in iColorama to lightly process it and paint the lips and eye. I then blended the original photo and masked it to bring out some detail in the eyes. I’m in there somewhere behind the mask 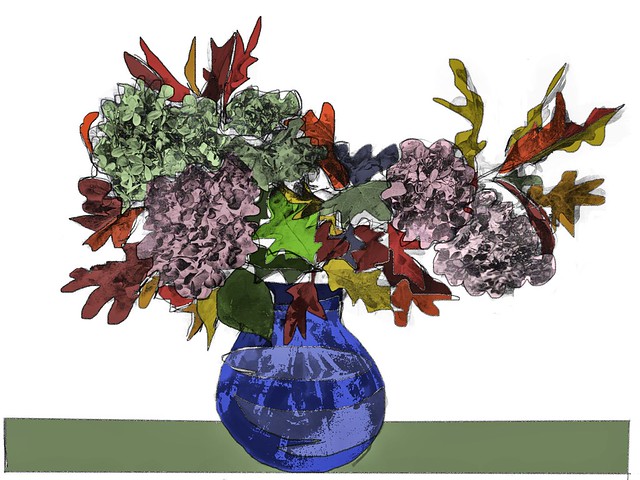 Thank you very much for including me in Apps Uncovered. It is one of my favorite mobile digital art features, and I have learned a lot over the years from the other artists featured.

For Autumn Gathering I used both iColorama and Procreate.

I started with a photograph from my iPhone of a bouquet from my garden. I decided to create a late fall image that brought together the past peak leaves with the subtle fading colors of the hydrangeas. I wanted a clean but bracing image that mixed flat painting with noisy photographic detail.

I took the photo into Procreate and warped it to emphasize the sweep of the branches and leaves.

I used the new image to make a few black and white images, looking for high contrast line work in iColorama.

Back in Procreate, I made a loose line drawing of the bouquet in its own layer and turned the photograph layer off. I set the line drawing layer as a reference layer and filled the shapes inside it with colors.

The last step was to add another line drawing layer with the outline of a table, set it as a reference layer, and fill it with color. 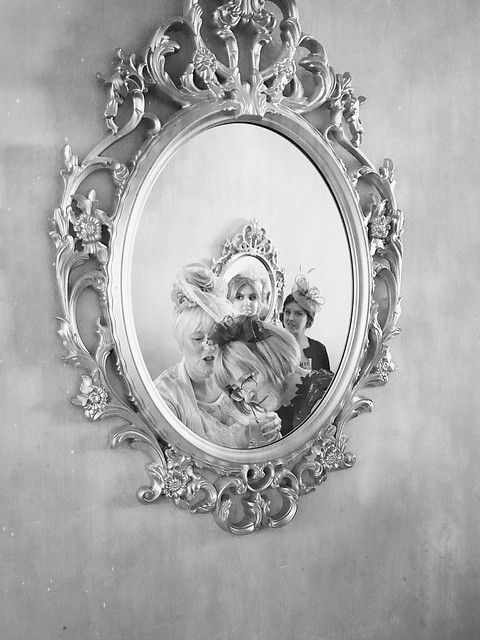 Apps Used: Snapseed for a general edit, Touch Retouch to remove a small bit of ceiling cornicing, VSCO for tonal tuning and finally Mextures for a little bit of texture.

Backstory: I was attending the wedding of my girlfriend’s brother and thought it would be a good opportunity to use my street photography skills to take some shots. This image was from the reception when family members were getting drinks prior to the meal and chilling out after the ceremony. I noticed that this mirror had one good angle to get a shot where it would look as if it was taken straight on with the mirror in the centre reflected behind it. I waited for the ladies in the image to create an interesting composition and fired off a couple of shots. This one won hands down. Luckily it was slightly off centre otherwise I would have appeared in the shot. I’m very pleased how the shot worked out considering I had only a few seconds to compose, catch a moment and fire the trigger. 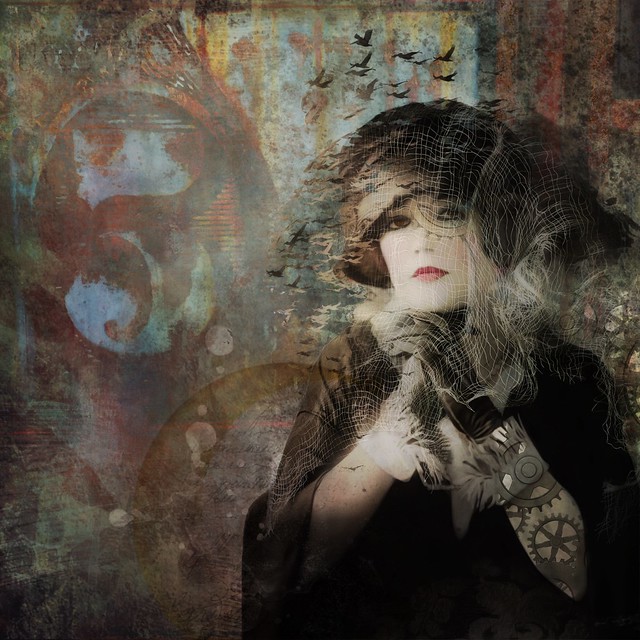 Lately, I’ve been going through the many, many files I have on my devices- trying to organize, cull, send to the Cloud, and generally clean things up. It’s been fun uncovering images long forgotten. That’s how this piece came together- a vintage image, an image of a door to a bank, some random gears, and more. Also, learning to use Affinity Photo and it’s many features. I especially love the lighting effects.

After that: Pixelmator to control some of the overlay over some of the people (like the traffic policeman). 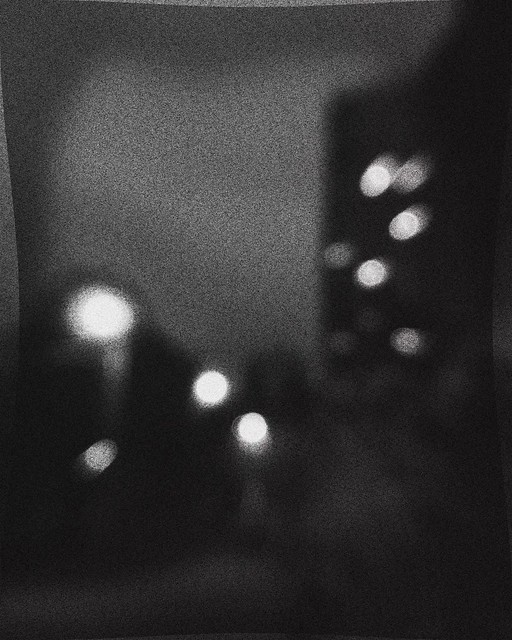 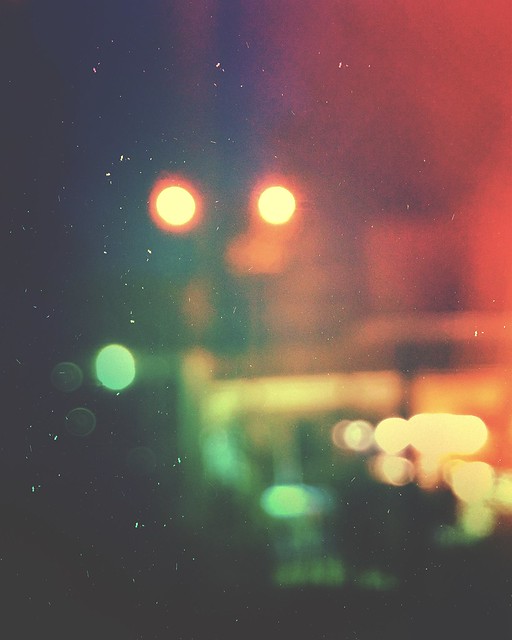 1) the shot was taken with iPhone 7+, using ‘macro’ mode in Camera+ 2 app. Edited in Mextures app.

2) that night I had the idea how to get nice natural bokeh on night streetphoto. ‘Macro’ mode of Camera+ 2 app without picking a focus is exact tool for this I thought. So, I took a series if shots, and then edited them separately with the help of different iOS apps. This shot was edited in Mextures. 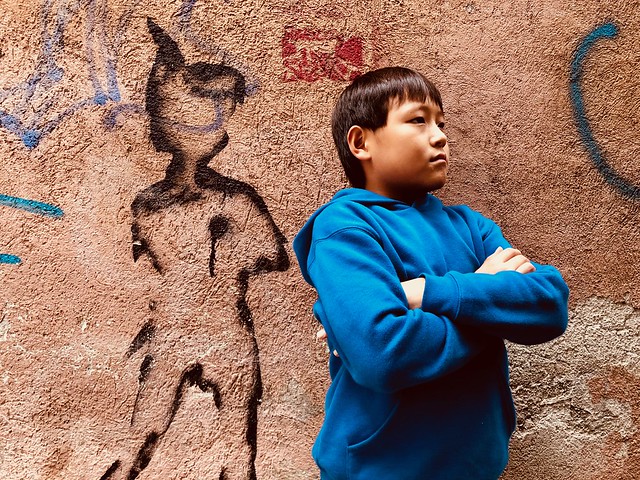 Backstory: My son Liang near his favorite hero … looks like him!

Phone and Apps used: I shot it with my iPhone 8 Plus and processed in Snapseed. 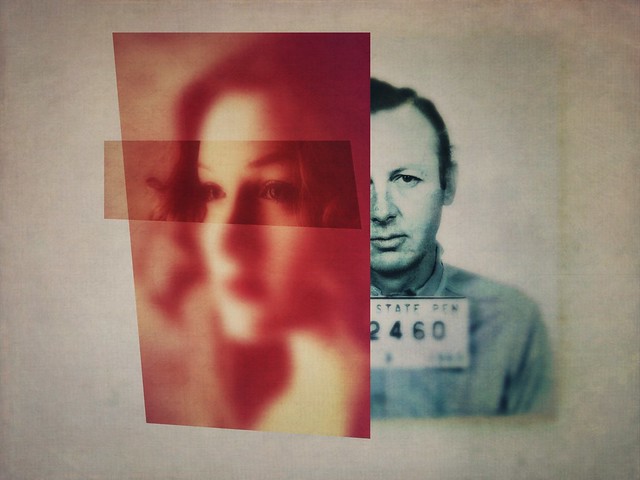 This image is a composite of a photo I took of death row inmates at the old Colorado State Penitentiary in Canon City, Colorado, and an image courtesy of Roksolana Zasiadko via Unsplash. The prisoner image was processed in Hipstamatic and Relight then imported into Superimpose. The female image was converted from color to b/w, then to monochrome color and layered in with the prisoner.

Together they suggest a story of offender and victim, dull color and vibrance, he possessed of an almost cocky and irreverent arrogance; she turned away from him but unable to dismiss his presence, seeing him still with clarity despite the passage of time. 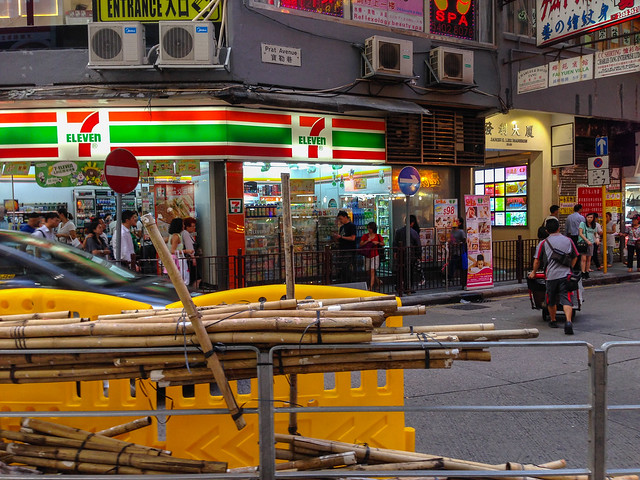 Colour and movement on the Hong Kong Streets.

My wife and I were in Hong Kong for pleasure. We have visited several times over the years as tourists. One of my wife’s former employers has stores in various parts of Hong Kong. This particular visit was completely for pleasure. We had brought my wife parents along too as my Father-in-law had not seen Hong Kong.

My wife’s knowledge of the city was excellent. After having worked for short stints of time in the company’s stores. Over the years she has found many fun and tasty restaurants. When we travel, we have days where I wander and make pictures, while she shops. This was one of those days. I was returning from one of the ‘territories’ of Honk Kong as they’re called; with my father-in-law. The aim, to rendezvous at a particular restaurant in this area of Kowloon. We were somewhat lost though. (Having a beer with my Father-in-law may not have helped.)

I always attempt to lose myself in cities where I am a tourist. Being in that state of heightened sense makes me more aware of my surroundings. Giving me better picture opportunities. Having an iPhone that I can whip out at a moments notice is helpful too. This brief moment in the backstreets of Kowloon was once such moment. I could see the elements falling into place as I composed my camera and fired off 6 quick pictures. The other two horizontals had the car dominating the frame. I also shot 3 verticals. In the end I choose this one for its colour and ‘hint’ of movement.

My process involves using ProCamera. I use this app because I can seperate, focus and exposure. Other useful tools in the app are, white balance iso and shutter speed. I like the +/-E/Vs feature for getting the information I need too. I also get a live histogram on the screen as I work. I then use the editing tools in the Apple native app. I use them to fine tune my exposure and other settings. These are light [brilliance, exposure, highlights, shadows, contrast, black point]. Then I adjust colour [using saturation and sometimes cast]. 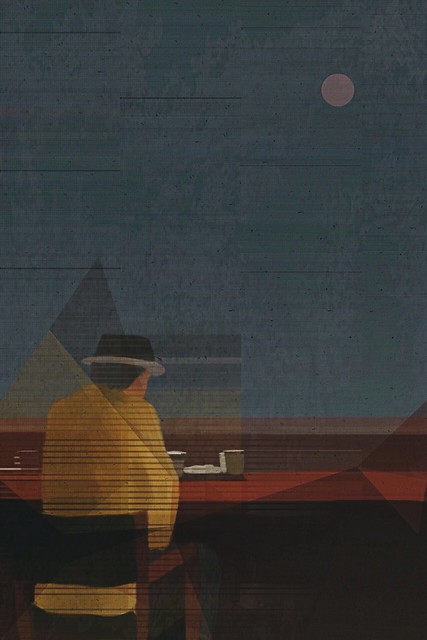