I am running very late this week with the last minute preparations for my online course; an online tutorial course that demonstrates, step-by-step my slow shutter painterly, collage and abstract work techniques. I am very excited about this work and will be publishing details of the course in the next newsletter so please sign up here if you haven’t already, to find out more….

….and so to this week’s Apps Uncovered

Bob Weil and I take a few hours out each week to put Apps Uncovered (AU) together and of course the pleasure is all ours as we sit back, relax and take in your wonderful work and learn about the wonderful stories and techniques behind the art. As if this wasn’t enough, we often receive emails on how you, the readers, love the AU feature, especially how much you learn from it..whether you are a beginner or advanced, it appears there is always something to be gleaned from the words you write. Only this week, one of our talented contributors wrote to me from Berlin telling me of the increasingly popular photo workshops she gives there and how she directs her students to the weekly AU feature as a learning resource….so I wanted to say thank you to all of you who take the trouble to write your back stories and include the apps used…I know it can be tricky and sometimes hard to remember (I certainly have difficulties remembering every step) but I hope, that by knowing that our global audience will be looking and learning from your work and your words will be a great motivator….I know, that every 2 weeks, when I sit down to write Apps Uncovered this is my inspiration.

With that in mind a huge big thank you to everybody who has ever contributed to the longest running iPhoneography gallery and to the fabulously talented artists who made the group this week including:
Dariusz Sobiecki, David DeNagel, Angie Lambert,  Scott Simpson, Eliza Badoiu, Sandra Becker, Kristie Benoit, Elaine Taylor, Luisón and Sheldon Serkin

Have a great week shooting and editing and look forward to seeing next week’s gallery.

IMPORTANT CHANGES TO THE GROUP:  It is a real pleasure for Bob and I to pour through the weekly gallery of your images each week. We love reading about the stories and techniques behind the images and then sharing the best of them with the world. This can take a few hours to put together, and can even longer when image-sharing is disabled on a Flickr member’s images.

Apps used: Processed with VSCO with c1 preset. IPhone 6+ Apps used: Snapseed, VSCO.
Backstory: There’s a place in my home city Gdynia, Poland where it’s worth trying waiting for shots from a high angle. It’s a “celebrity” kind of huge steps down to a nice cafe on a basement, but an open level of Gdynia Film Centre. Quite often, people tend to sit down on the steps, busy chatting either with each other or with their devices. The large, red area, filled with geometrical elements with interesting street life going on is a perfect spot for a great shot hunting. Quite recently I took a photo there which, since then, has been the key one in my portfolio. It’s a mixture of minimalist potential and real life scenes that make this location so unique. In postproduction, it was sufficient to use the wide range of Snapseed options, with the final touch of VSCO.

Apps used: I used only Oggl. I chose a cool toned combo with some blurring: Tinto lens and Robusta film. Shot with an iPhone 5
Backstory: This image was taken during a sojourn to St. Louis. It was very cold and few people were out. The only sounds were from sparse street traffic ,going to and from work. Snow covered the ground. I walked to the City Garden area. There was hardly any activity. Tall impersonal buildings rose in the background like frozen cliffs. Then a man, huddled in his winter clothing and hunched over from the cold, appeared from a side street and walked the length of this long, huge block wall. The bent solitary man, the vacant look of the imposing wall and the cold city all contributed to the starkness of isolation. Hence the title: Alone in Winter. 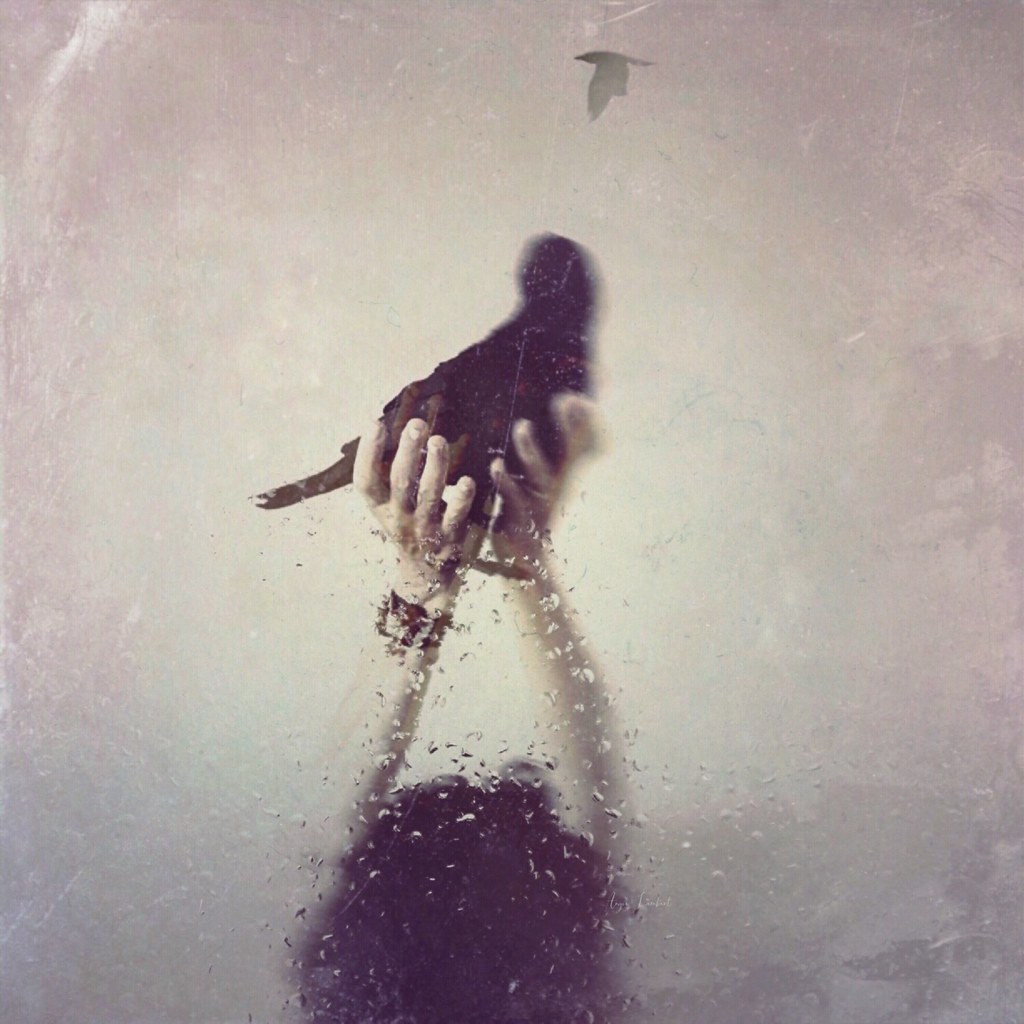 Apps used: iPhone 6 Plus native camera, Repix, Mextures and Image Blender
Backstory: It starts with the bird. I am walking through a small shop, at the mall, with a friend. I glance over and see a bird perched on a table among Halloween decorations. Though someone feels that it is a fall decorative piece, smiling, I clearly see it has a year-round necessity. I gather the bird, excitedly pay for it, and then the creative fodder begins to flutter in my mind. A day or two passes. I am at home, and it comes to me. The idea of flying or the want to fly seems to matter. More importantly, what if this flightless bird could fly? She whispered and said, “I WANT to.” For my love of photography and storytelling, I find myself creating this image. It proves that inspiration comes in all shapes, sizes, sounds, and feelings. Mobile photography offers such an artful conduit through which sharing becomes an artform. 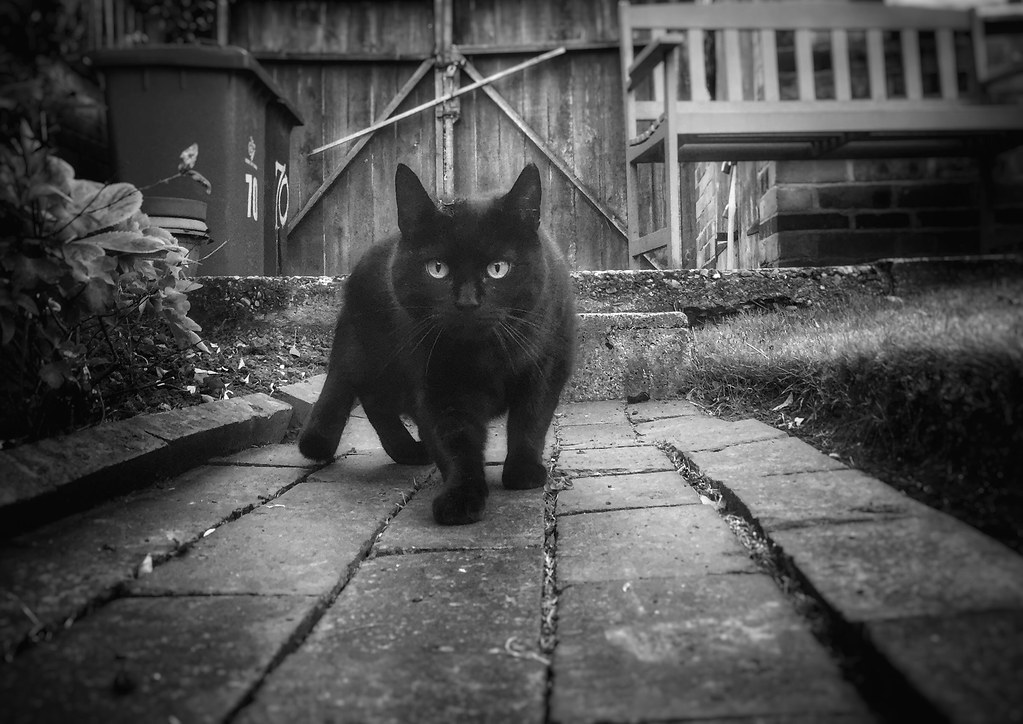 Apps used: It was shot on an iphone6 with all the editing done in snapseed.
Backstory: This photo is part of my on going 366 project, it features my next door neighbours cat which is possibly the most unfriendly cat I have ever met…this is one of only a handful of shots that I have managed to get of this cat as it is very unapproachable. I particularly like this image as the cat is looking directly at the lens. 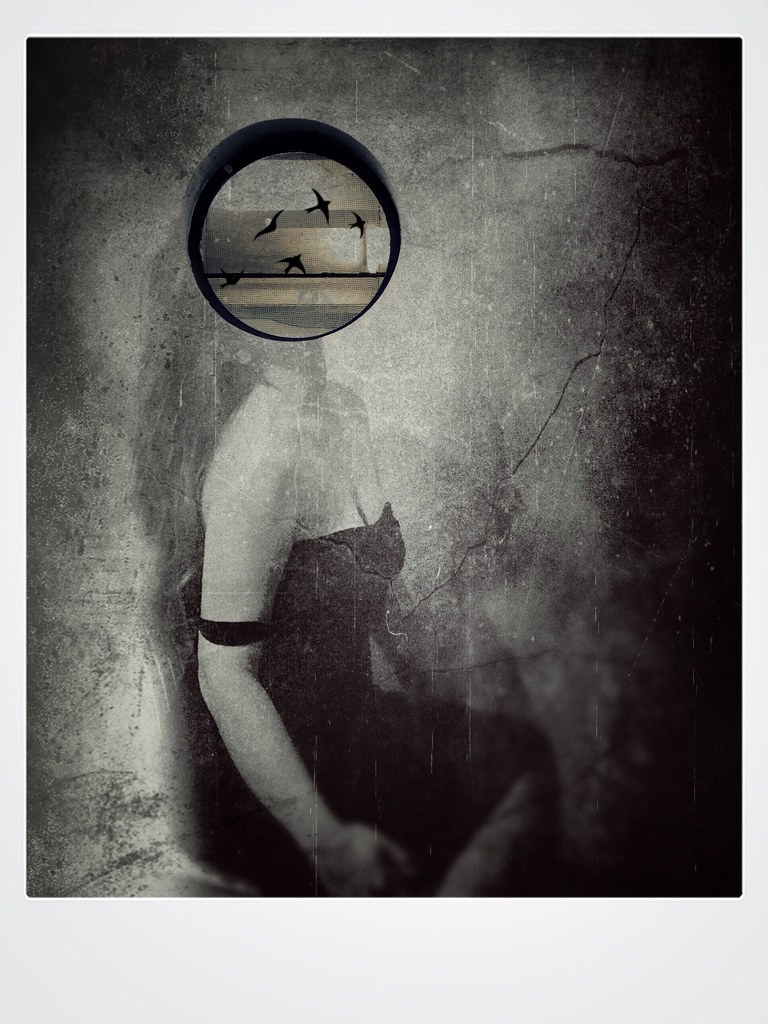 Apps used: Snapseed, Stackbles, Mextures and Pixlr
Backstory: This is my first self portrait after a period of about a month of non taking self shots, because I had to deal with some serious exams related to my formal,everyday job. After having overpassed it and while feeling relaxed again I took a self portrait, sitting on a chair against the wall.  I have operated some primal changes using Snapseed and after that I fixed the structure and texture of the image by filtering in Stackbles and Mextures. As summer moved on , the emotions inside my mind are being featured by layering in Pixlr another of my previous images, that I used as a substitute in order to replace the head. I often use to remove elements of the face in doing portraits as I believe the real truth is settled somewhere behind the daily mask, beneath the layers we all wear. Dissolution of the memoirs and some kind of inconsistency of being are released within seconds. 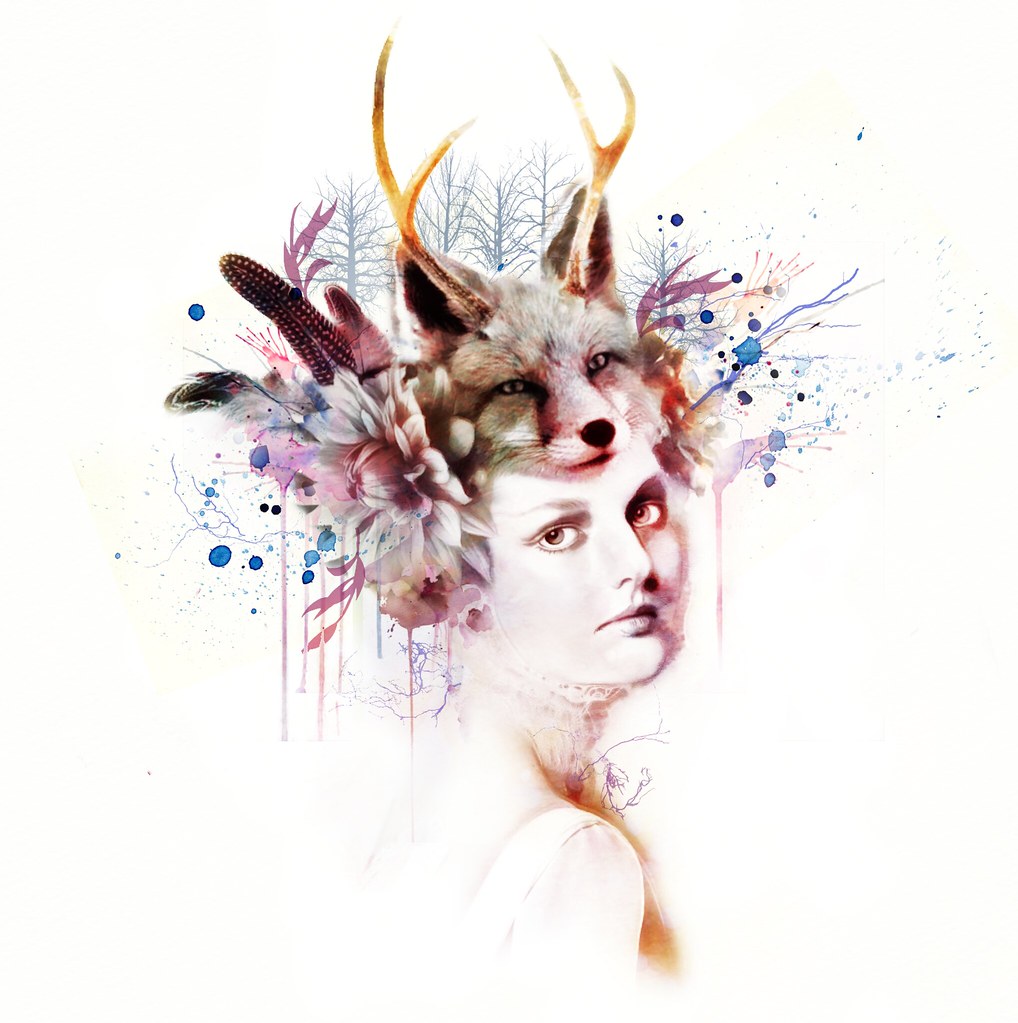 Apps used: ProCreate, and iColorama.
Backstory: Each part was separately drawn in ProCreate except for the feather photos. All was combined in iColorama because of its superb ability for blending. I then used various blend modes to add colored backgrounds that the drawings & neutral elements took on to add color. Parts of my watercolor textures were added along with different iColorama brush stampings, some from my added .abr files. Listen to The Fox (What Does The Fox Say?) – Single by Ylvis on @AppleMusic. itun.es/us/dXf-Q

Apps used: For this piece, I used a tripod and my iPhone on a self timer. I processed the image using a new app called BLACKIE (great for editing black and white images) and then I used SNAPSEED to put finishing touches on contrast and ambiance.

Apps used: I shot this with iPhone6S+.
Edited in Snapseed to crop and make minor tweaks.
I used TouchRetouch to remove an annoying light spot on the image.
Then I put it through Blackieapp – it was quite new to me and this image was one of my first attempts using the app.

Backstory: his is my son Billy. I took this photo on the plane home from a fabulous holiday in Portugal. Billy was reading and wasn’t aware I was looking at him. I watched the light dance around him as the plane changed direction. As the sun came into view through the window I took a few shots and was happy to discover this one on my camera roll later. 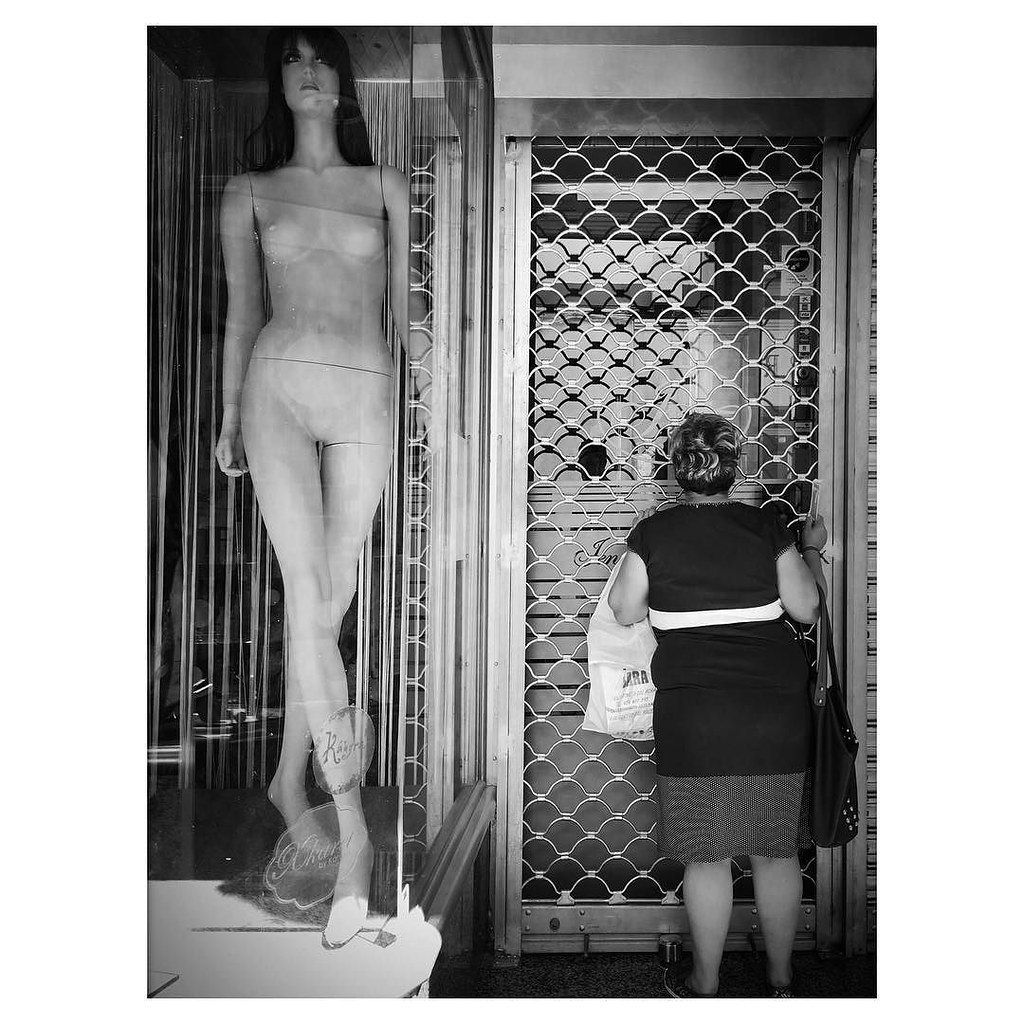 Apps used: Shot on an iPhone6S, Hipstamatic (Jane lenses + BlacKey SuperGrain film). Edited with FrontView and Snapseed.
Backstory: The pic was shot on my iPhone 6S Plus using Hipstamatic (Jane lenses + BlacKey SuperGrain film). Then I used FrontView to correct the distortion of the retinal lines and Snapseed to crop the frame and make slight adjustments of light and contrast. The background is simple: as I’ve always said, I wander with my eyes wide open and my iPhone ready to shoot. I just saw this woman looking through the glass of a closed shop and the plastic mannequin in the showcase. I very quickly imposed the image in my mind and the irony of a perfect plastic body in comparison with the woman’s real body. I framed them both, shot and walked away. 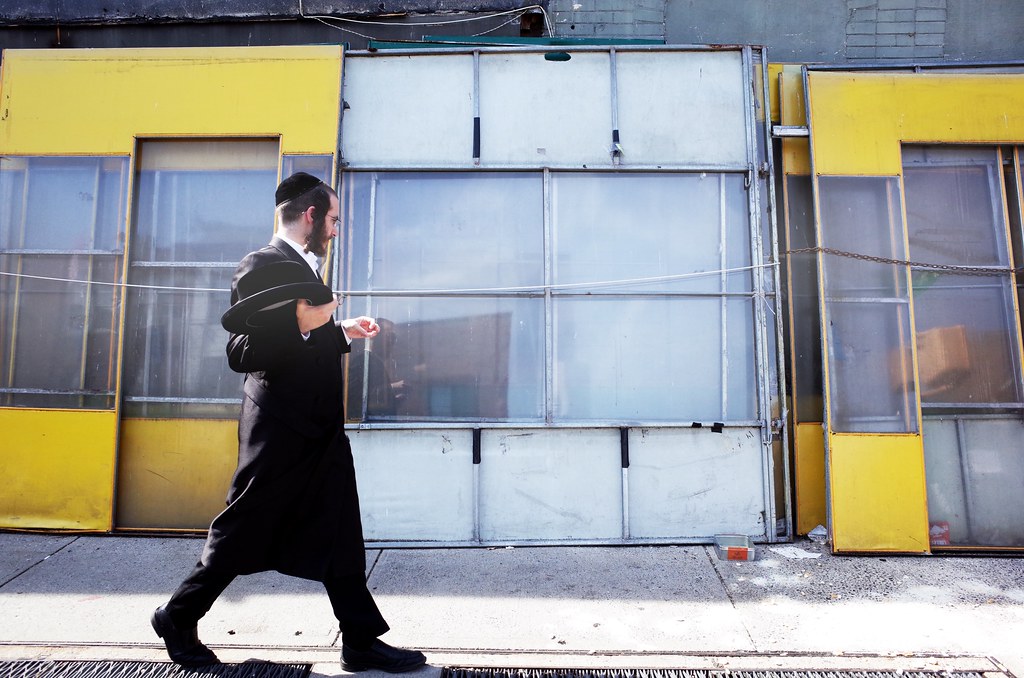 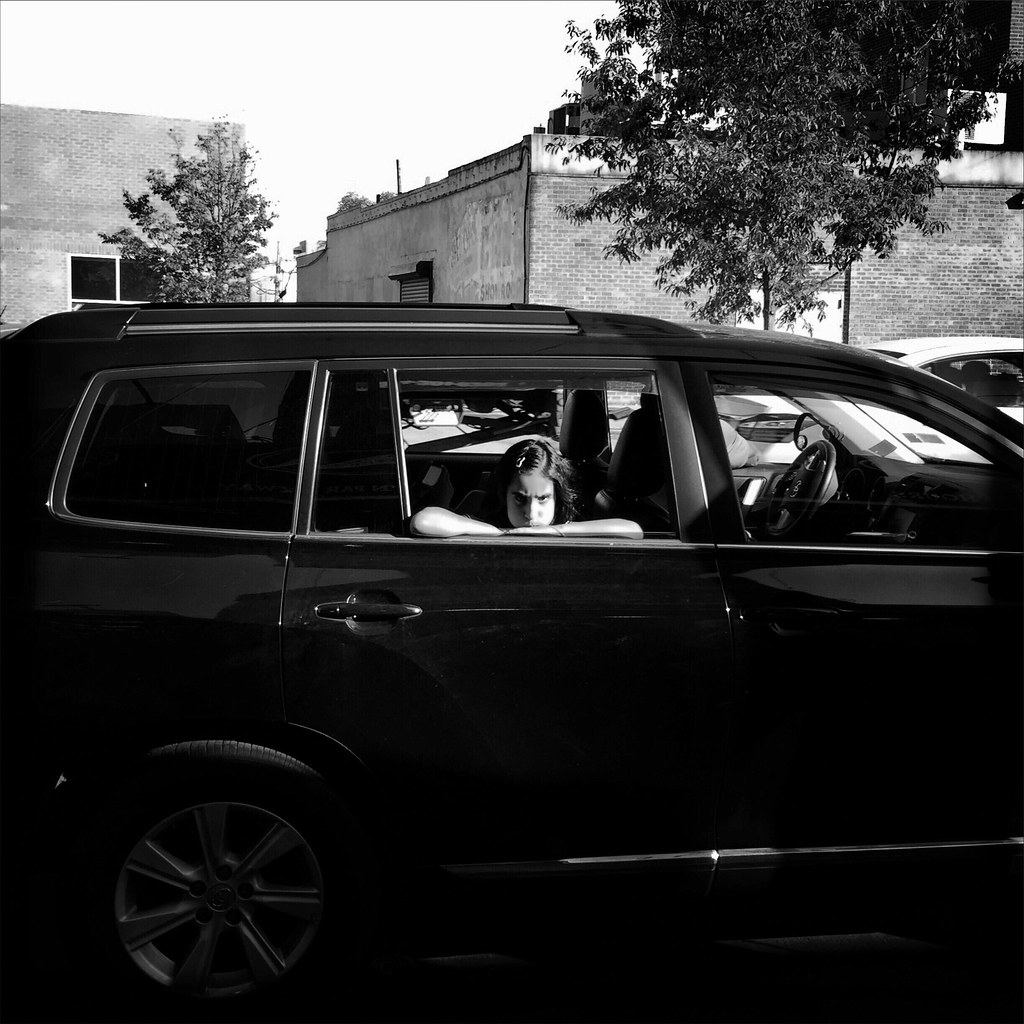