This time around, I was drawn to images that spoke of the coming autumn, my favourite season, with its moody weather and colourful moments.

Apps used: Self Portrait taken with iPhone 6+ and processed using Snapseed and Mextures.

Apps used: Shot on iPhone 7+ and processed with ProCamera and Snapseed
Backstory: Waiting outside the arrival customs for my family. I had a few minutes to observe the passengers who had just landed and coming out into the area where families and friends were waiting to greet and pick them up. I had my phone on a mini-tripod which I held firmly down on top of the barrier rail. Having pre-focused on the turning path of the passengers, set ISO, shutter speed, and white balance, and composed the frame, I saw this mother and daughter coming out and clicked the shutter while the little girl saw her waiting grandma. 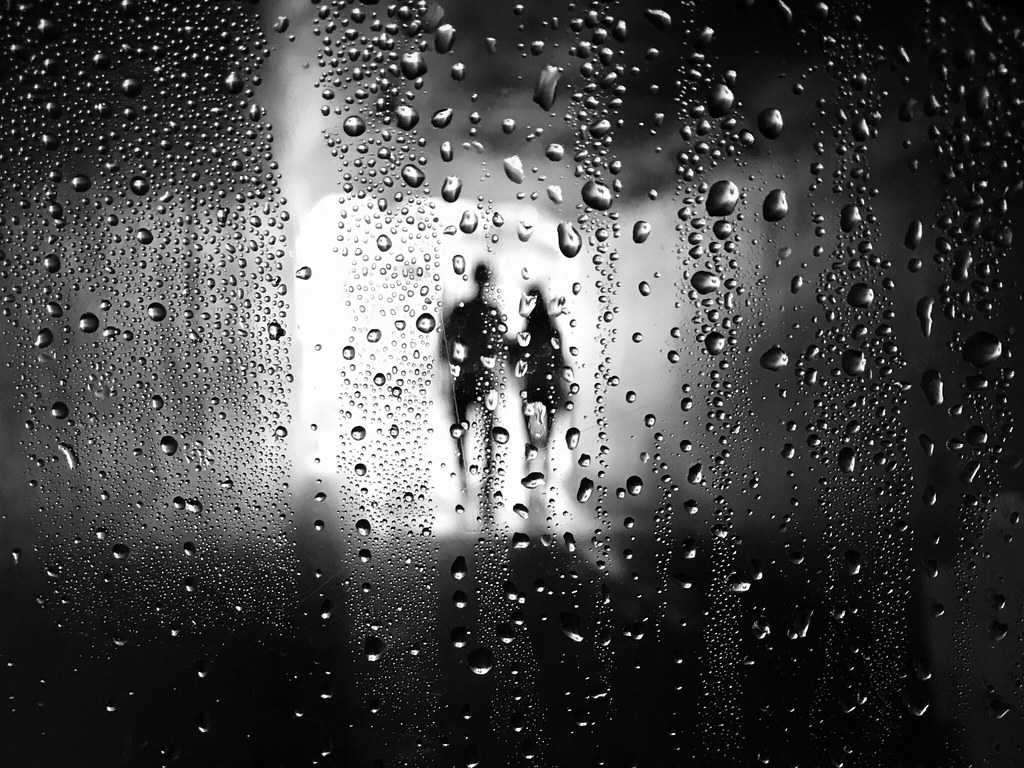 Apps used: Snapseed Backstory: ‘Future days’ was shot in Shibuya, Tokyo. There’s a cool, small tunnel with a bus stop at the other end. The bus stop isn’t really protected from the weather so a lot of rain hits the perspex glass which is perfect for a filter. The problem is waiting for the right silhouette to materialize. Fortunately, a couple holding hands passed through.. I then used snapseed to crop the image & used the vignette filter to darken the outside. 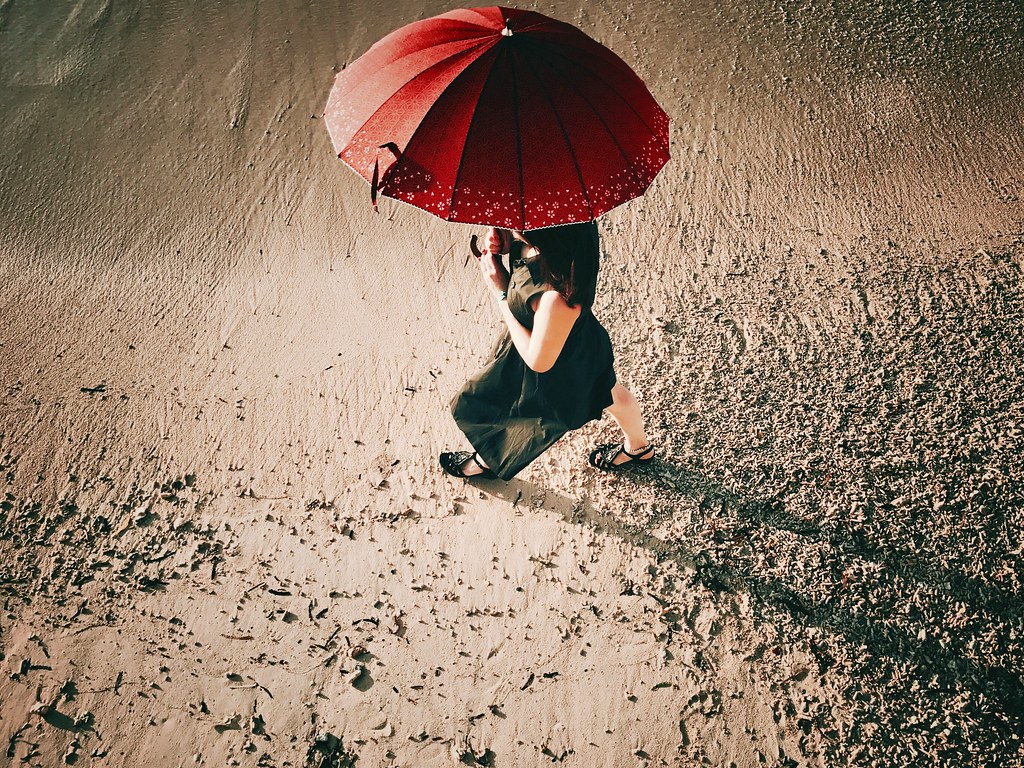 Apps used: Snapseed
Backstory: ‘Red umbrella’ was shot in Tancha Bay, Okinawa. I wanted to try some beach shots from above so I borrowed a hotel chair and used a selfie stick to take some pictures of my wife walking along the beach. Unfortunately, I couldn’t actually see what I was shooting so I just shot in burst mode and hoped for the best. I then tweaked the image slightly in Snapseed to increase the colour. 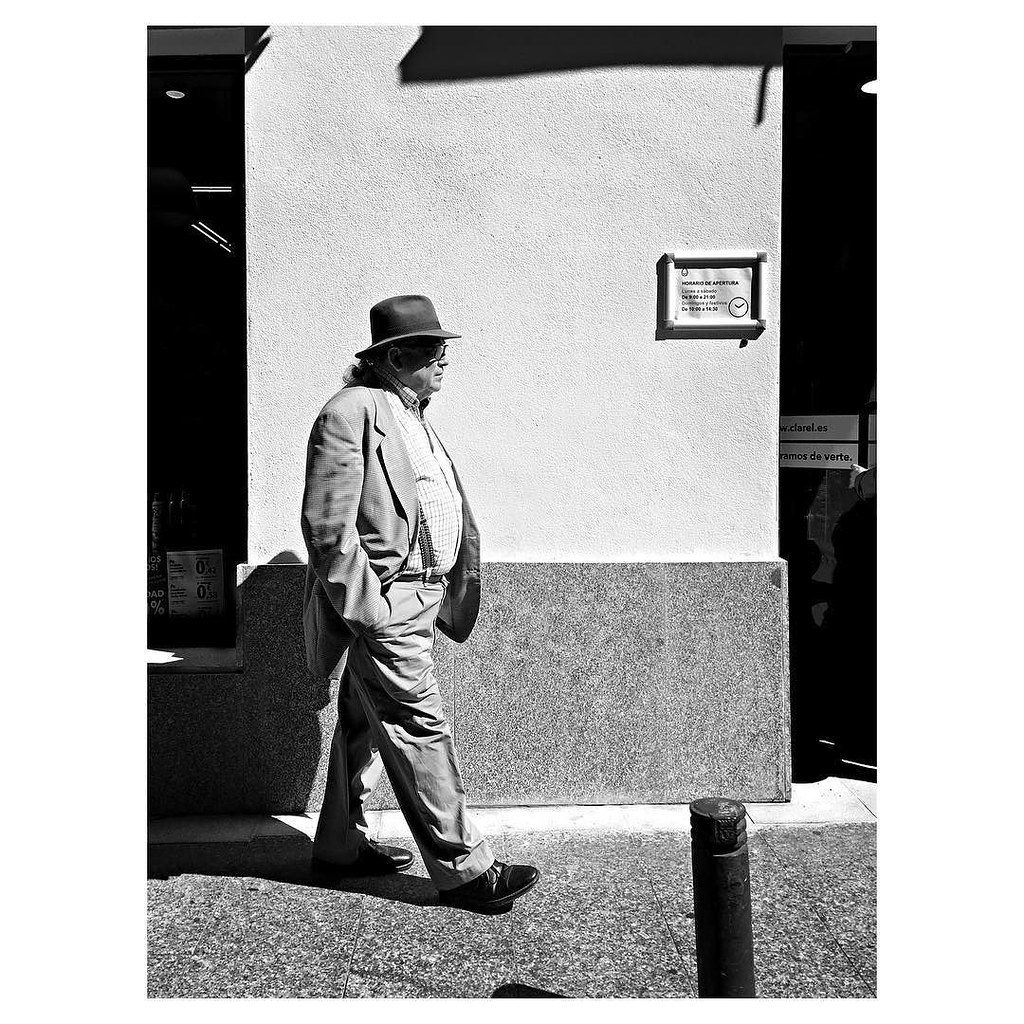 Apps used: It was shot on my iPhone 6S. Then I used FrontView to correct the vertical lines, which were slightly distorted, and then used BlackieApp to turn it black and white. Backstory: It was shot in the street where I live. I always walk with my eyes wide open, ready to shoot. This man with his hat and suspenders caught my eye, saw he was walking in the sun, so I waited for him to pass in front of me and shot. 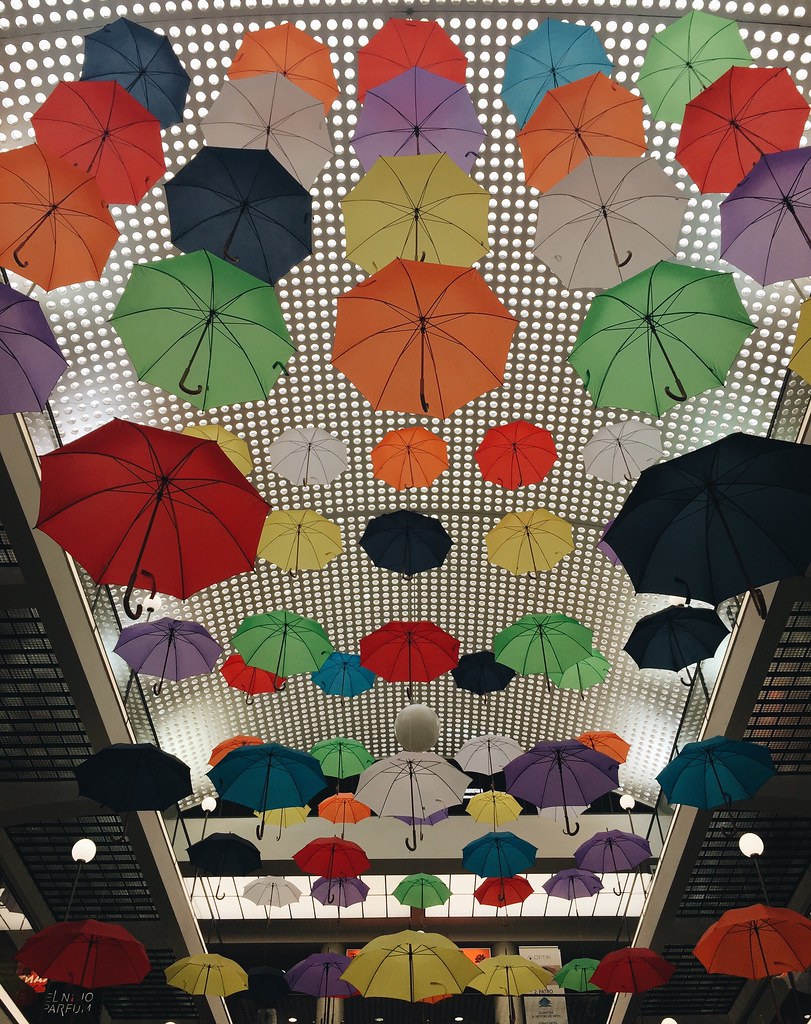 Apps used: VSCO is the app that I used at A6 preset.
Backstory: I was on holiday and taking a bus trip that went through several countries. Praha was one of our destinations. While we were taking a walk, we entered a small mall. I saw the colorful umbrellas and I took some photos. It was an unexpected moment for me. 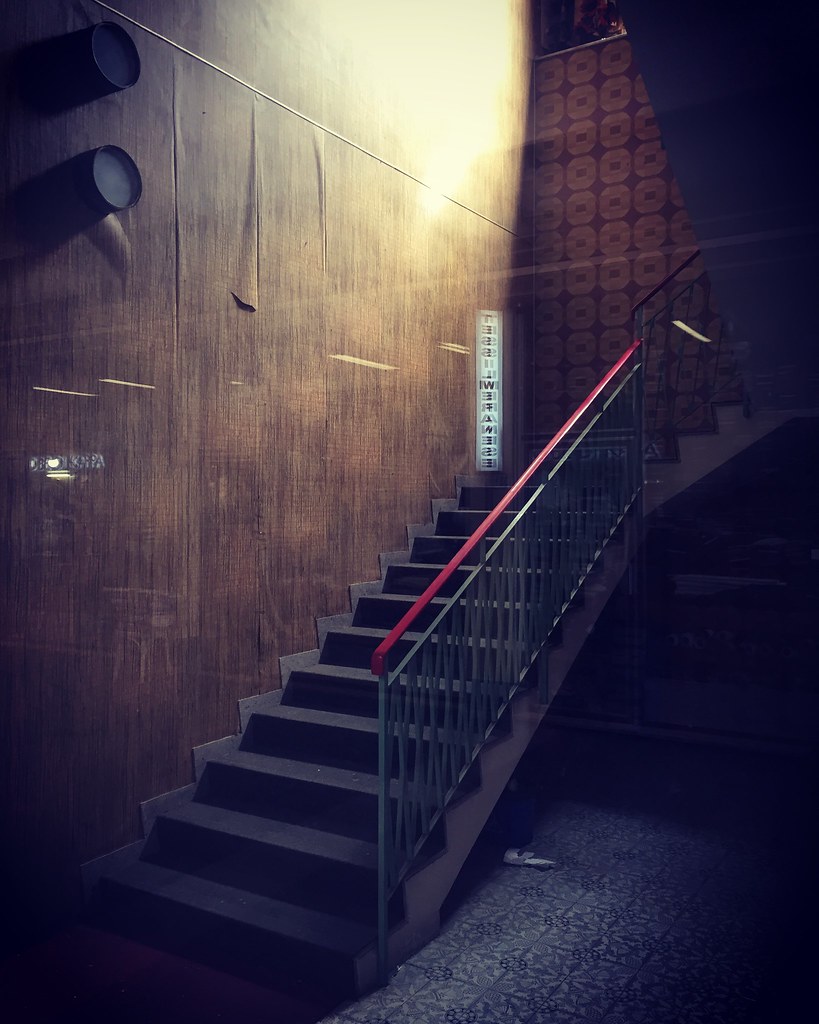 Apps used: Taken with an iPhone6 and processed with Instagram’s filter X-Pro II. Backstory: “Meran September 2017” I pass in front of that doorway at least once a week. This time the lighting showed me the wallpaper’s unevenness. I tried my best to avoid my reflection through the windowpane and to include the two round flat wall lamps in the frame. That determined the perspective. 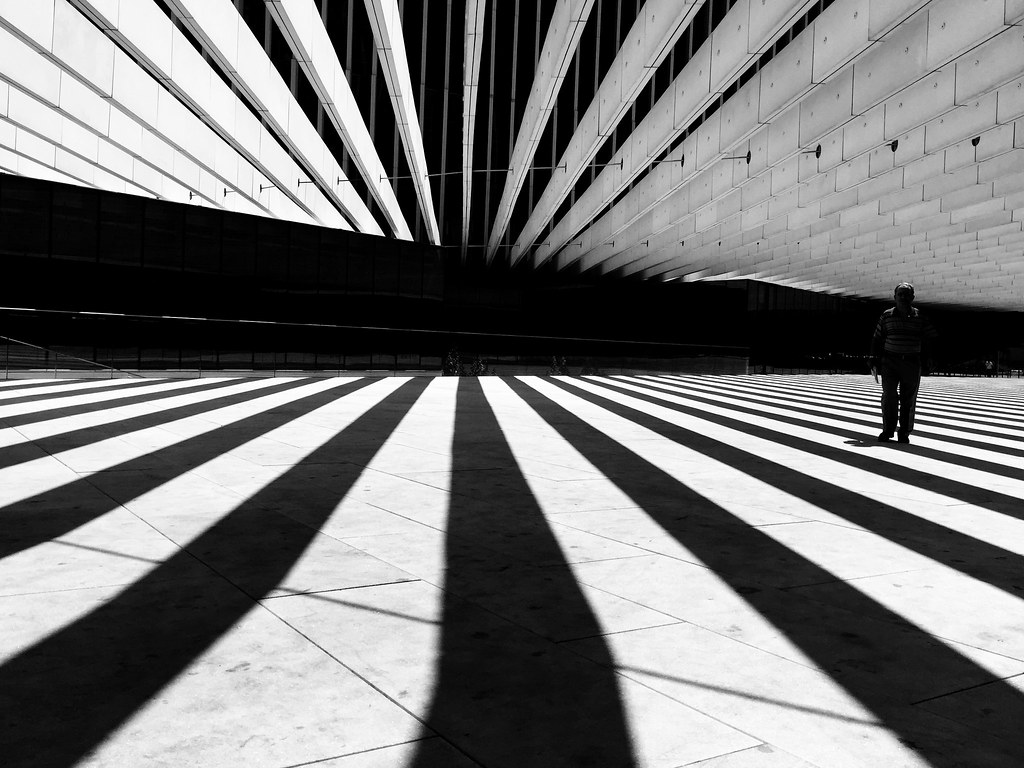 Apps used: I shot this with the iPhone 6 camera and edited with Snapseed.
Backstory: This image was taken whilst enjoying a leisurely walk around Lisbon in Portugal. What caught my eye was the shadows on the floor that the building was casting on the floor. This is a fairly modern building so it was a complete contrast to the surrounding buildings that were very old or derelict. 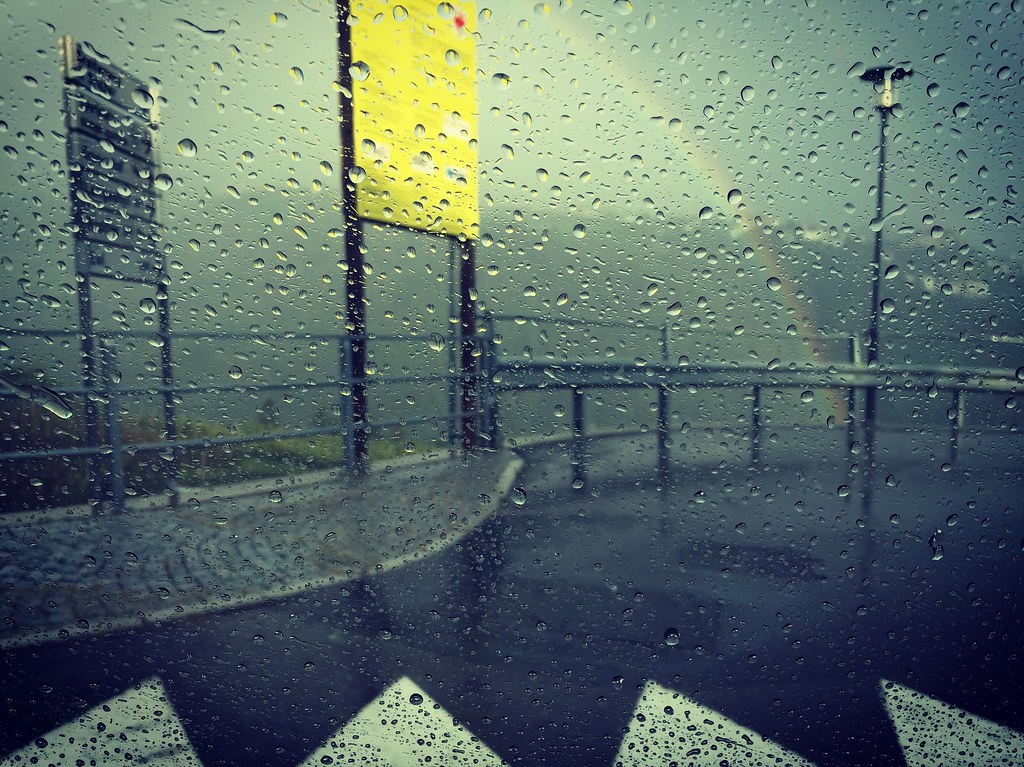 Apps used: Taken with an iPhone6 and processed with Instagram’s filter X-Pro II. Backstory: I was driving home on a rainy afternoon when the rainbow appeared. I was hitching to take a picture of it, but I could not stop. then traffic start queueing, and as I stopped, I pointed my iPhone at the rainbow through the dotted window pane of the passenger seat. I did not have the time to think, I saw that the rainbow seemed to origin from the light pole base and all was working nicely. I wanted to try to have another shot focusing on the outside of the window, but it takes a while to trick an iPhone autofocus, and traffic resumed. 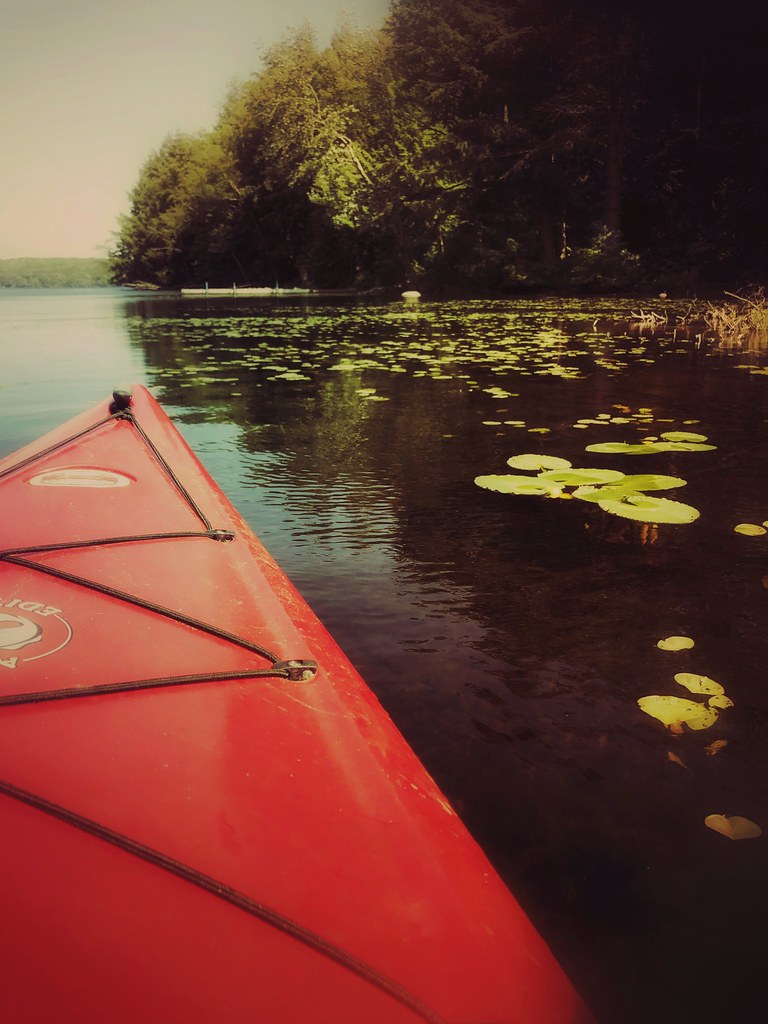 Apps used: Shot on iPhone 7 Plus and edited with Mextures, Snapseed,and PSxpress
Backstory: This image was taken on a beautiful day out on the lake, enjoying some time with a close friend soaking up the sun and just enjoying the moment. Quiet tranquil atmosphere, fresh air, togetherness. It was picture perfect.