Welcome to this week’s – slightly late (my apologies) – Apps Uncovered, our weekly feature, showcasing iPhone art and photography from around the world.

I am rather late publishing this week so I am going to quickly thank our lead spot iPhone photographer Jeffrey Simpson for his beautiful image “Simple”. His carefully crafted image simply made me smile, such an open and touching portrait of Jeffrey Simpson and his wife – something adorable about those wonderful bottom shapes joined by the entwined arms and the part reveal of each of their tattoos  – a beautiful expression of growing together.

Since we iPhoneographers tend to be drawn toward the melancholy and edgy, darker side of photography, I thought I’d opt for something different this week to end the showcase with Evo-PlayLoud’s wonderfully bright and happy image. Such a mood of happiness captured in this bright yellow sunny image and Evo takes great care to explain in his backstory the elements in the image that went towards creating and enhancing the happy mood captured in this picture.

Thank you to everyone who submits to our weekly Flickr showcase. If you would like to be considered the weekly gallery, please join our iPC Flickr group by clicking here. 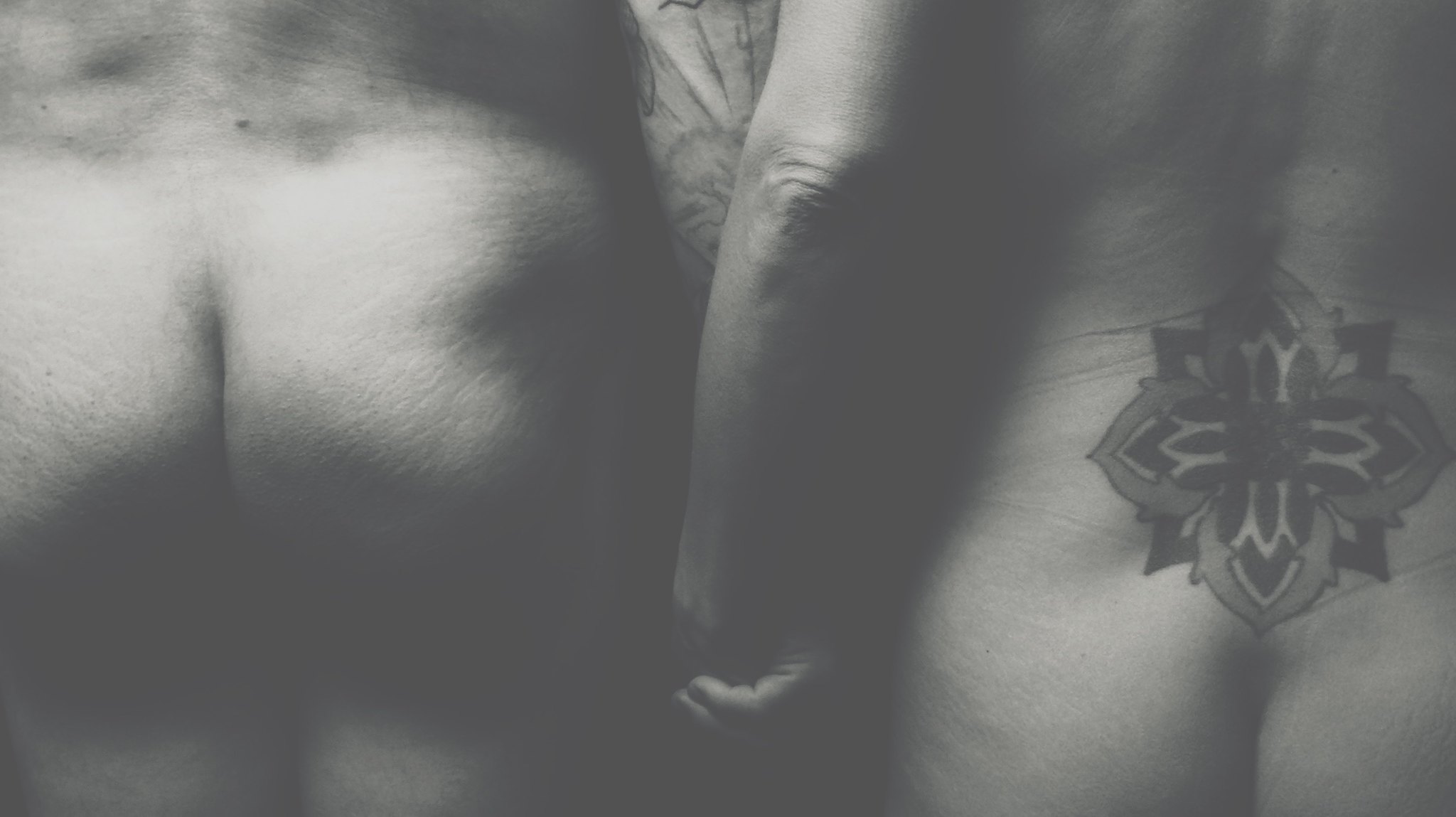 Apps used: I shot this with Pureshot… edit was in Snapseed , Filterstorm, and VSCOcam.
Backstory: Just a simple love story. My wife and I.

Apps used: This self portrait image was shot on my iPhone, using the self timer feature. I used PaintFx to completely black out the background, and soften the entire image using the blur effect. I then brought the image into Mextures, where I created my own formula, using several layers of textures. I prefer most of self portraits to be black and white, so I finished it off, by using that option in the app.
Backstory: I try to capture my emotions through self portraiture and this particular image was taken at a time where I was feeling unsure about things going on in my life. I’m always hoping to create powerful images, no matter what the feelings may be. 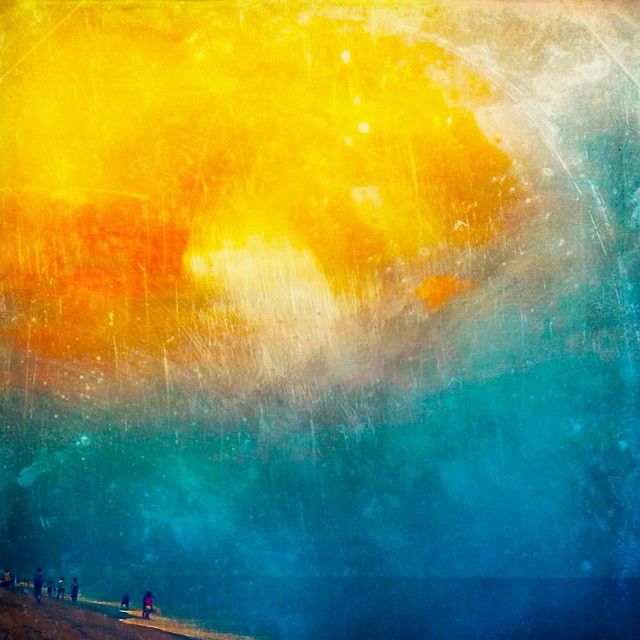 Wash of Sunlight by Susan Blase

Apps used: PhotoToaster, PicArt and Mextures on iPhone
Backstory: I had this shot on my phone a long time until I edited/posted. It was an option for album art I was working on, so It just sat in my archives for months. Most of the effect came from using a preset I made with PhotoToaster. The result was more earthy tones but the “painting effect” kind of came by accident using PhotoToaster, however the sky was very dramatic to begin with in the raw picture, which greatly helped.

I wanted it to look more colorful and summer like, so I tried running it through PicArt which is mainly an app for applying text, however it’s got some nice filters for shifting hues. This is when it came to life and I decided to keep this more vibrant version. Lastly used Mextures to apply finishing touches which were minor. I do think it looks like a painting so I named it as such. This one didn’t make it as final choice for the cover art, but it was indeed one of my favorites of the bunch. 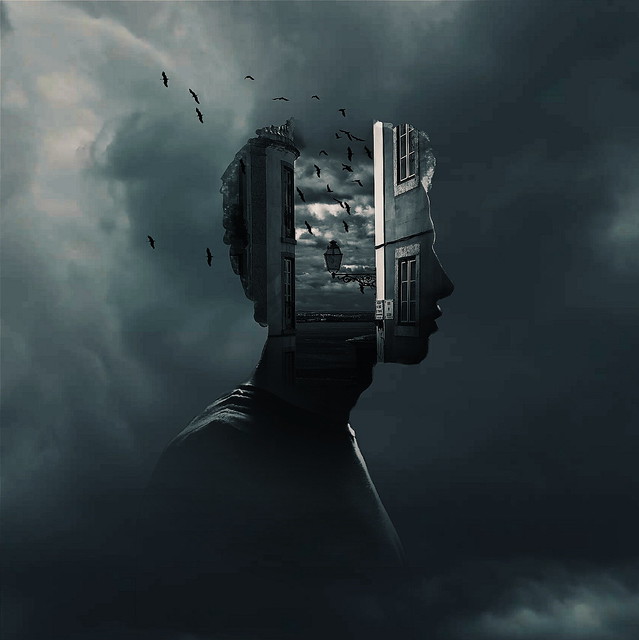 Apps used: I took the portrait using iPhone 5s and also I edited it using iPhone 5s. The applications I used are Picsart for the double exposure effect and VSCOcam for the final retouch
Backstory: I also have a tutorial for this edit but I used my android tablet to make the edit once more for the tutorial so I can have higher resolution screenshots. Here’s the link if you’re interested “https://www.youtube.com/watch?v=e5m1aat4ztE”. I did this picture because I was trying to do something new and different from the other double exposures I made, something more surreal. So that’s it, If there’s anything i missed to mention let me know please. 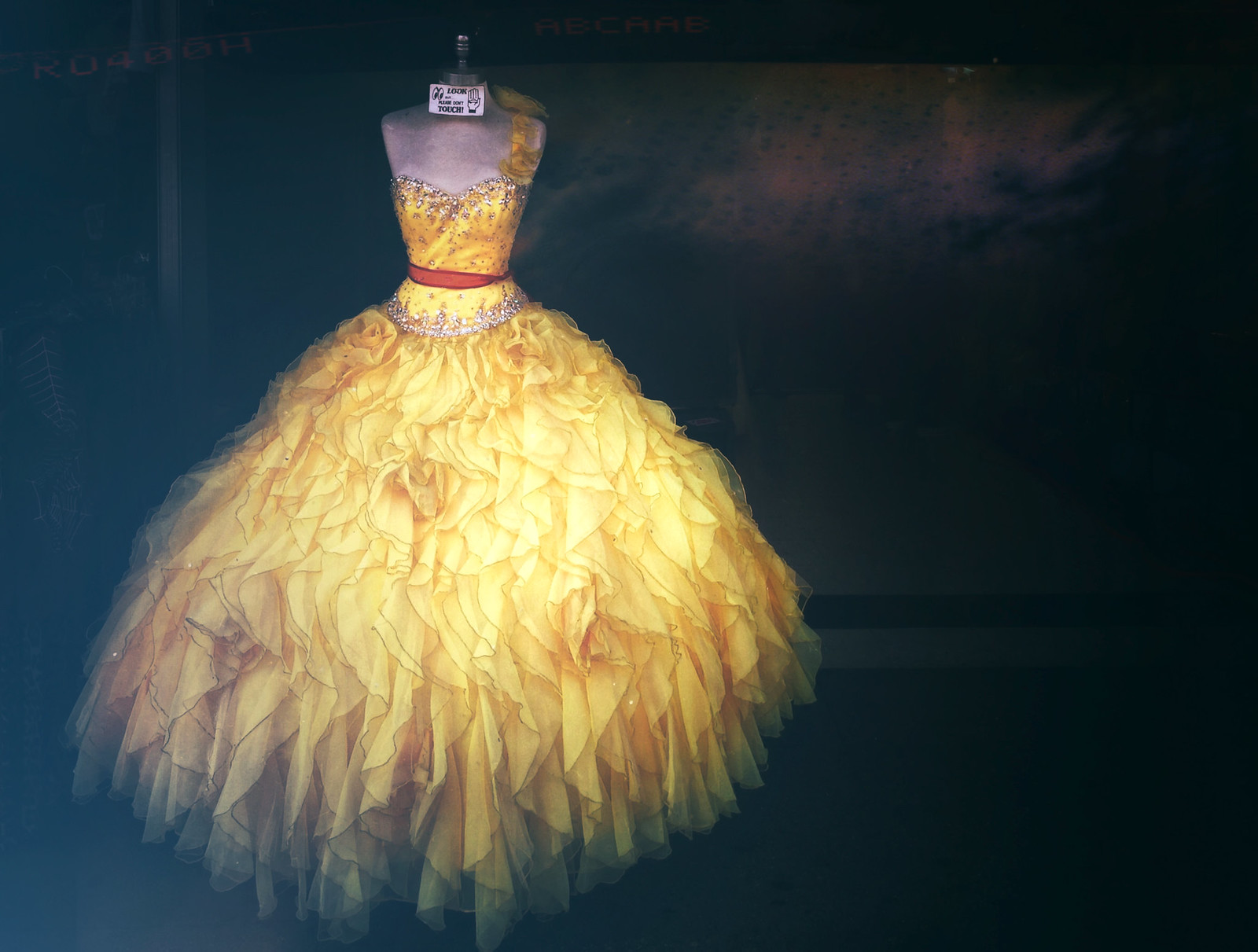 Apps used: Shot with my iPhone 5, I edited this image in Snapseed and Mextures.
Backstory: This image was part of our Sunday adventure through downtown Los Angeles. We rode the Metro to Union Station, walked across the street to Olvera Street for a delicious lunch, and decided to walk into downtown L.A. We were suddenly surprised to find ourselves in the midst of a gigantic annual street festival called Fiesta Broadway. Along our walk, I came across this bright yellow dress at the entrance of a bridal gown shop. How can you possibly pass this dress without having a reaction to it? To me, this colorful dress represents both the vibrancy of the Hispanic culture and the tone of the day. Everyone there was out to have a great time!

Apps used: This self portrait image was shot on my iPhone, using the self timer feature. I used PaintFx to completely black out the background, and soften the entire image using the blur effect. I then brought the image into Mextures, where I created my own formula, using several layers of textures. I prefer most of self portraits to be black and white, so I finished it off, by using that option in the app.

I try to capture my emotions through self portraiture and this particular image was taken at a time where I was feeling unsure about things going on in my life. I’m always hoping to create powerful images, no matter what the feelings may be.

Apps used: SlowshutterCam, SketchbookPro, Leonardo and Snapseed.
Backstory: While my wife was pausing for a moment at our storage space i took the picture with my iPhone 5S using #Slowshuttercam thus the blurred face and extra “weight in her arms. Then using my iPad utilizing #SketchbookPro I drew with the eraser to smear the background. Then to #Leonardo for overlays after that #Snapseed to soften and tone for the “old time” feel.

Apps used: Handy Photo
Backstory: This image was shot using my iPhone’s front facing camera. I exclusively used the Handy Photo app for this edit. In the app, I went into Filters and used black and white, then layered it with halftone, I then went into the Textures and used an abstract layer. I finished it off with a square crop.

With this image, I was practicing layering techniques, and a more abstract style of editing, as it’s not my usual style. I like to branch out and try new styles of editing, to keep myself evolving as an artist. 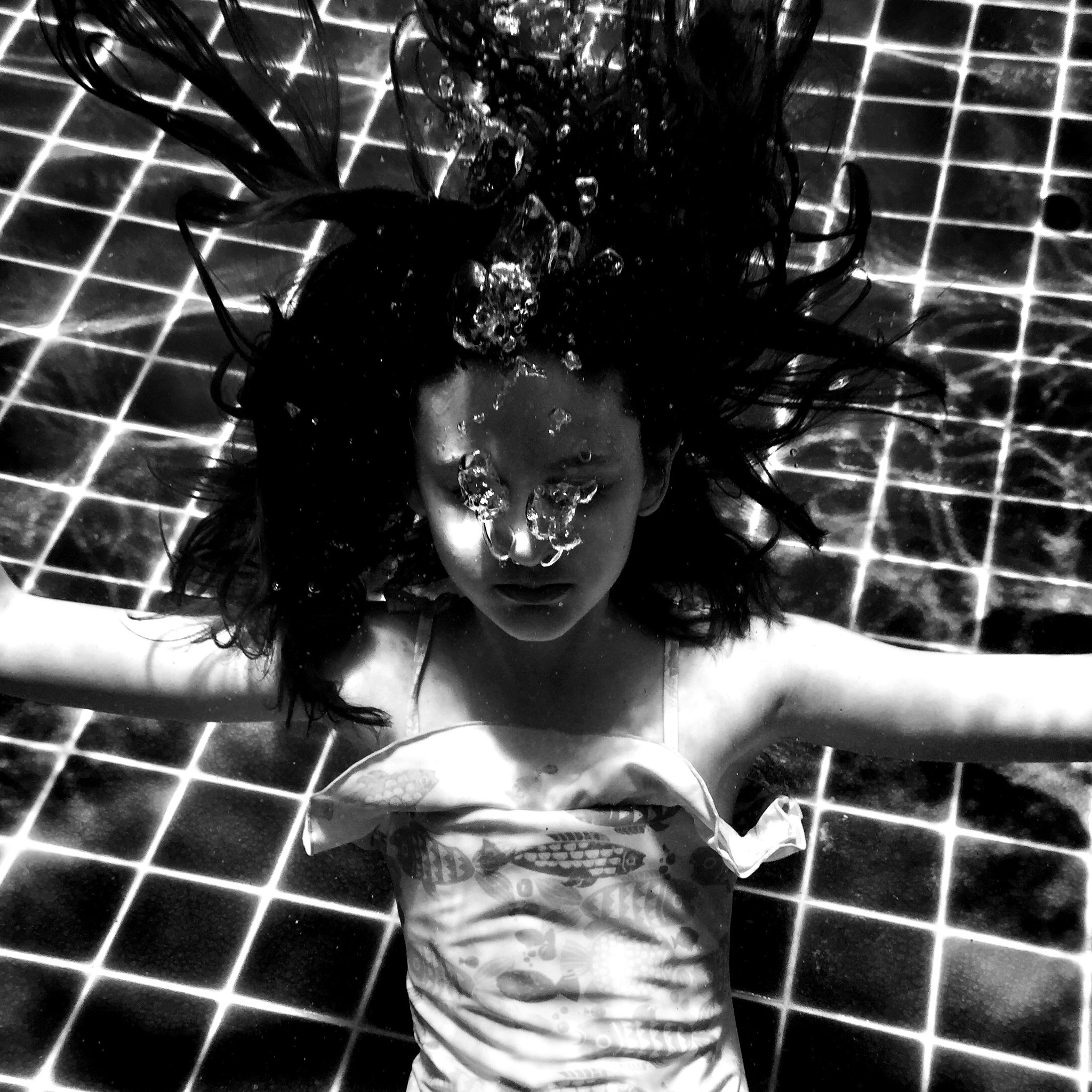 Apps used: native apple camera on the iPhone6 and edited in Snapseed
Backstory: I just returned to Shanghai from Thailand where this photo was taken, and I hope I am answering you in time. It was taken on iphone 6 using the lifeproof case underwater. I was playing with my daughter (10) in the pool and testing out the case. It was in Krabi, Thailand earlier this week. I took it with the camera phone, edited and cropped in Snapseed. 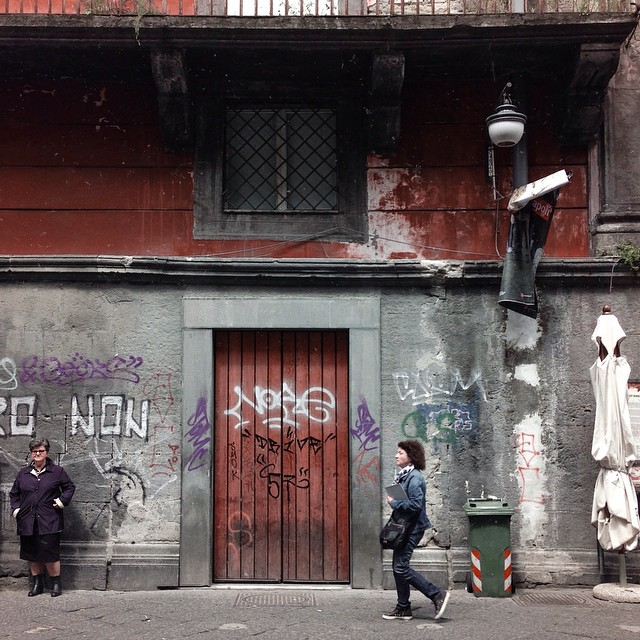 Apps used: The image was entirely edited on Snapseed. Whenever I convert my iPhone images to BW, I am trying to best simulate the look and feel of analogue photography. Snapseed have improved the app tremendously in their last update, including the ability to selectively edit/delete different stages of the editing process, so I thoroughly recommend it to iPhoneographers as a powerful editing tool.

Backstory: I took this image in a very well known coffee house on Lexington Ave, New York. It had been a very long and tiring day as I was running around Manhattan trying to take photographs in the limited amount of time available. I had gone into the coffee house to recharge my batteries (literally and figuratively) and also to connect to the wifi. When I saw the light coming through the windows (and my own reflection), I knew there would be a possibility of capturing some ‘interactive’ self-portraits with people walking past. I love New York and the atmosphere of its streets, in my experience people are overwhelmingly positive (you can see the man smiling in the right of the picture, having clocked me as he walked past), so I hope people interpret the photograph as a testament to that ‘unique New Yorkness’. 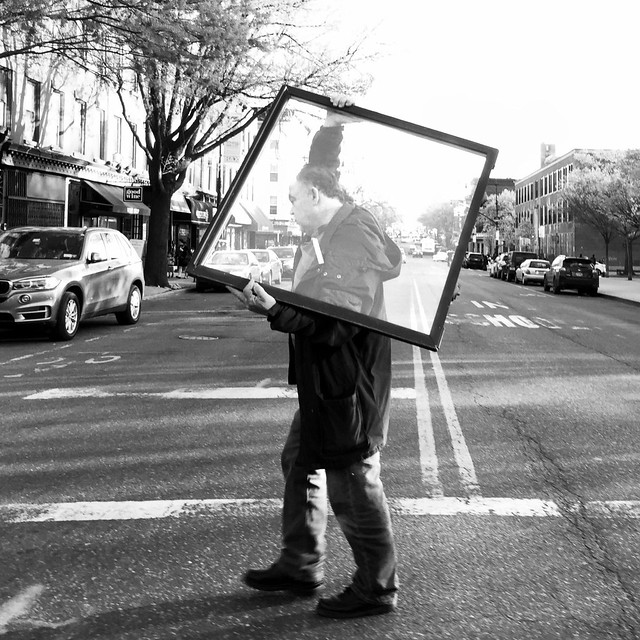 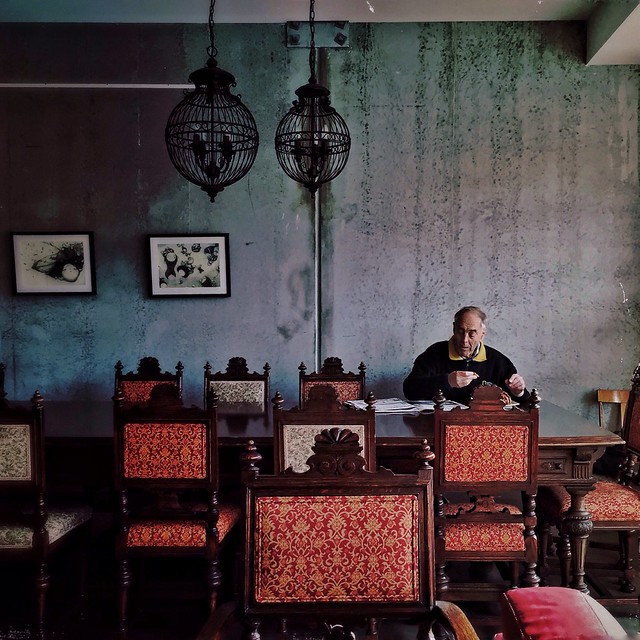 To Relax & Enjoy Life (By Blackbird Café) by Michelle Robinson 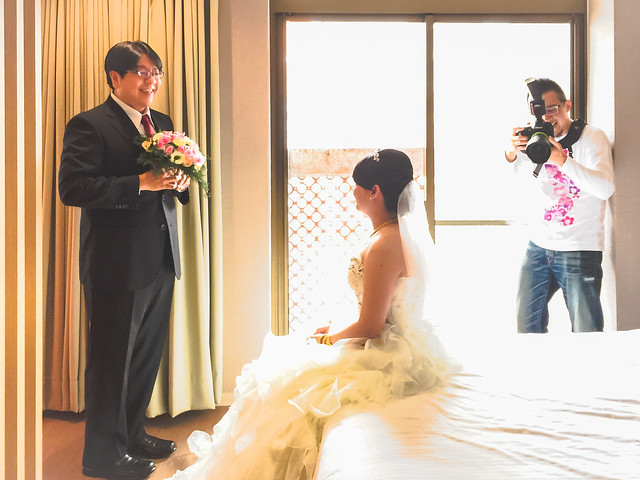 Apps used: Photoshop Express + iOS 8’s Photo app.
Backstory:The groom is my cousin, and I was the best man on wedding ceremony that day. Actually, the groom was just practising at this moment, so the wedding photographer was checking the image, and what we don’t see is [the] bride’s face – she was so moved and emotional with tears in her eyes. Even though it was a rehearsal, I thought it was the best moment to press the button, because of the true happiness that was revealed from  [the] groom’s expression, and equally from the photographer. My favorite, and maybe the most important part in this pic I think, is just the sincere laugh on the photographer’s face, it truly tells all～:）

In addition, limited to the dynamic range of iPhone’s camera, the highlight parts outside the window and on the bed were severely overexposed, but I didn’t think it ruined this picture, on the contrary, it strengthened the whole atmosphere～:）