This week’s Apps Uncovered presents a selection of what I found to be the most compelling images for the week in our Flickr group, across a wide range of styles and subjects – but with one common theme – something a bit eerie, and odd – maybe creepy, about the subject or the way it was captured. A little late for Halloween, perhaps, but still a galvinizing collection, if I do say so myself.

This week’s lead artwork is a capture of the character of “Mafalda” by the cartoonist Quino, famous in Latin America.. The perspective is close, yet panoramic, which add to the drama. For those of us in North America, it almost feels like something from the Peanuts character gallery – not entirely unlike Lucy. But somehow a Lucy from a different dimension. 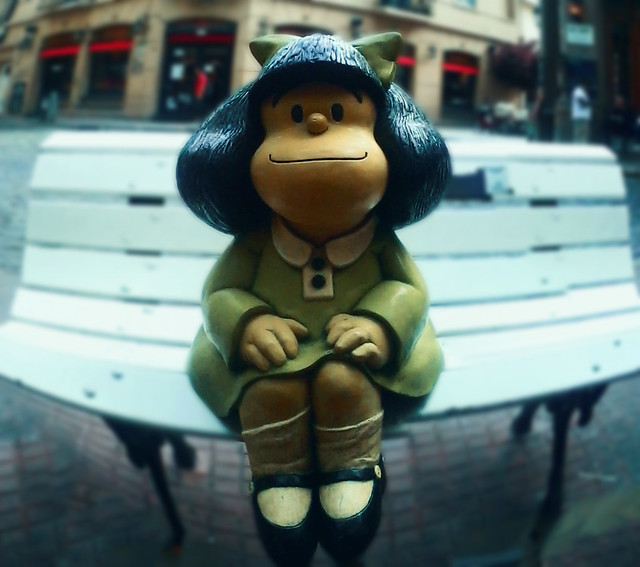 Apps used: VSCO and SNAPSEED
Backstory: The monument is located in Buenos Aires, Argentina, is the character of the comics “Mafalda” by the cartoonist Quino, famous in Latin America. I wanted to make a capture and perspective and different edition to all the photographs that tourists continuously take.

Early Winter in the Drôme Provençale by Vanessa Vox

Apps used: Hipstamatic, iColorama, Stackables
Backstory: I just walked out of the village shop as this cute snowman looked at me intensely, like saying: ‘Please hurry! Get out your iphone cam, I’m afraid I will melt soon looking at you!’. Wow! What a charming young fellow! 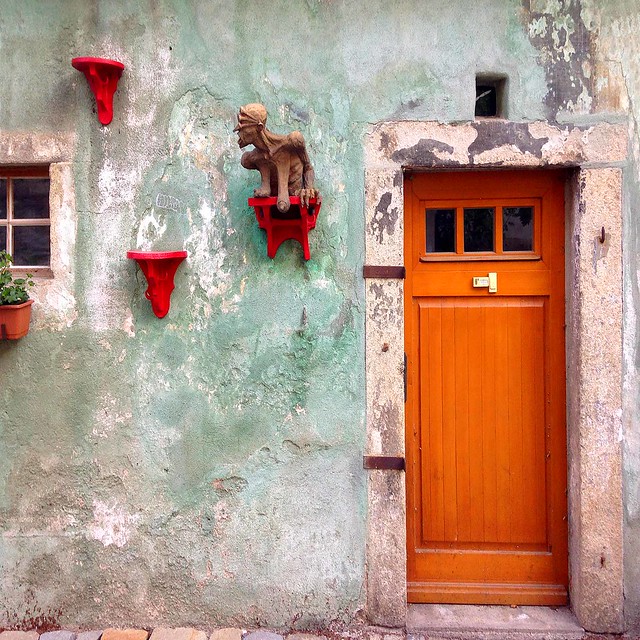 the last survivor in cesky krumlov by sculptoII

Apps used and backstory: As a sculptor, I am always interested in other’s sculpture works. Wandering in the back street of cesky krumlov, I noticed only one statue remains on the three sculpture wall stands. It’s a pretty good one, especially for the setting. Therefore, it’s the last survivor. I snapped it with my phone, as I often do, with the default camera apps, cropped into square format with a photoshop, voilà. It seems so easy with the phone. 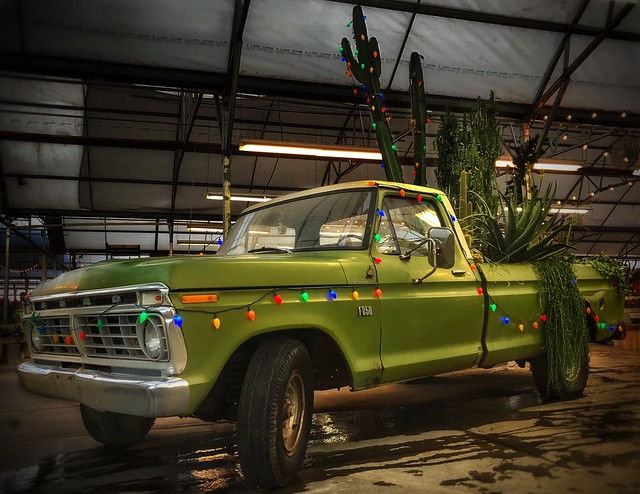 App used: Snapseed
Backstory: I was really happy with the B&W color splash and almost didn’t post this one, but I really liked it as well. I must like this old truck as I’ve taken a couple different shots of it over the last couple years. This old truck is owned by a local Nursery and has been relegated from workhorse to display. I’ve photographed it a couple times over the past few years as it has a great patina along with that pop of wonderful ‘70’s green. I edited the photo using Snapseed, using the ‘brush’ to bring the exposure of the background down to be more subtle focusing on the color pop of the truck. For the truck itself, I used the ‘HDR’ feature slightly to really bring out the color, but the truck is such a vibrant green, the original picture captured the color pretty well as is. 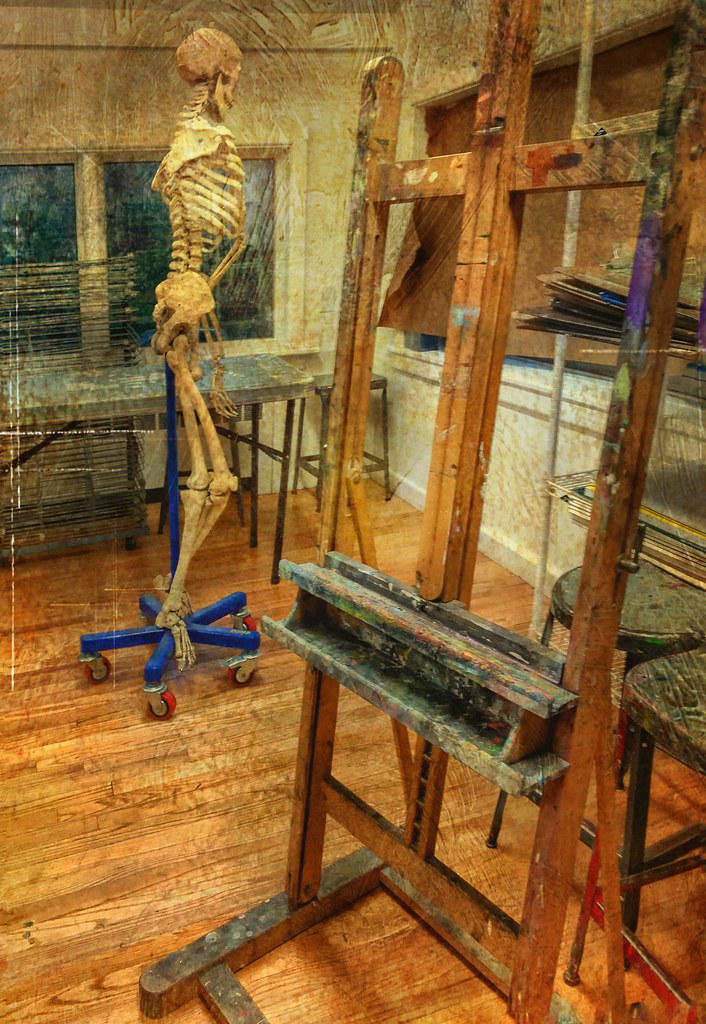 “Art” as Reduced to its Minimum Form by Sara Augenbraun

Apps used: iPhone 7plus, Snapseed and Distressedfx.
Backstory: I shot this photo at the conclusion of a weekend iPhone/iPad Artistry workshop that was given at a local artists’ guild in CT. The workshop was held in the front part of an art room generally used for non-photography art classes While loading up my iPhone, iPad, pencils and notes at the conclusion of the digital workshop, I noticed the ancient skeleton and old wooden easel in the back part of the same art room. It struck me how different were the apparatuses used in drawing, painting, etc. from those I use in the digital photography world. I was also struck by the way a painting student studies her medium versus the way a digital photography student like me studies mine. For each of us, however, we study our “Art” as Reduced to its Minimum Form. I used Snapseed for basic cropping and DistressedFX for a moody, minimal look. 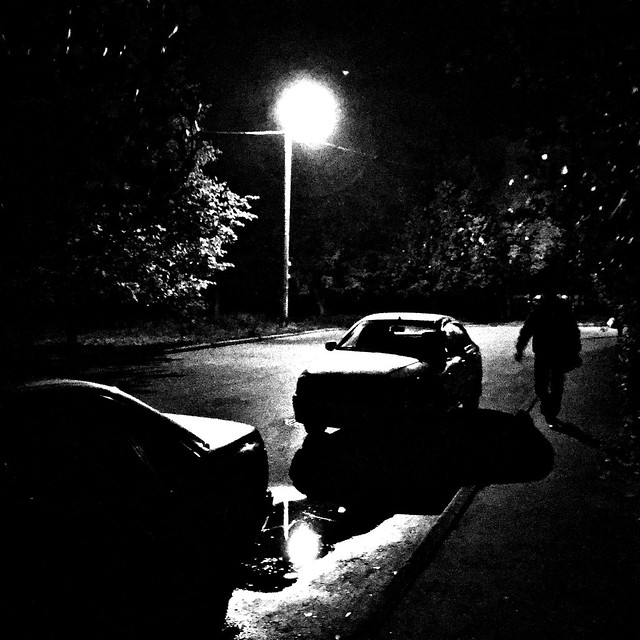 Apps used: The shot was taken by iPhone 7 Plus. Edited in Hipstamatic iOS app, using ‘Müller’ lens, ‘Fritiger’ film and ‘Triple Crown’ flash, and of course a lot of playing with sliders (vibrancy, texture, temperature etc.)
Backstory: I love night views and often try to catch a good balance of lights, shadows and flashes in the dark. Shooting this photo, I already saw the final edition of it in my mind. The goal was to make it dark, grainy, by all means black and white, and finally just ‘noir’. Hope I succeeded in what I was trying to accomplish. At least, to me the final image looks as much expressive as i wanted it to

Apps used: I used my iPhone 6s then edited with Snapseed, B&W, vintage and glamour glow settings.
Backstory: While driving through this neighborhood I first saw the cars and knew I had to stop and shoot. The covers were there to protect the cars from the overspray as the house painters worked.

Ready for a Walk Vanessa Vox

Apps used: Hipstamatic, iColorama
Backstory: Once upon a time there was a noble and friendly grandma, a big pink pig and a tiny black-white piglet… A colorful and imaginative scene rised up in my mind and the story began to weave. It was one of those grey and melancolic days at the end of november.
I’ve shot this pic on a flea market in the south of France. Little me was immediately caught by the expression of the figures as well as by the various structures of materials: the old untreated wood of the basket, the varnished wood of a homemade board game, the autumn leaves on the weathered cement steps.

I’m not there by Brendan Ó Sé

App used: Snapseed
Backstory: Shot was taken at a big hurling match in Ireland between my beloved Cork and Clare.
The image is part of an ongoing series of images shot on iPhone through glass. I love the distorted effect it creates, and the fact that I am in the frame also. Best thing of the day was Cork winning. Up the Rebels! 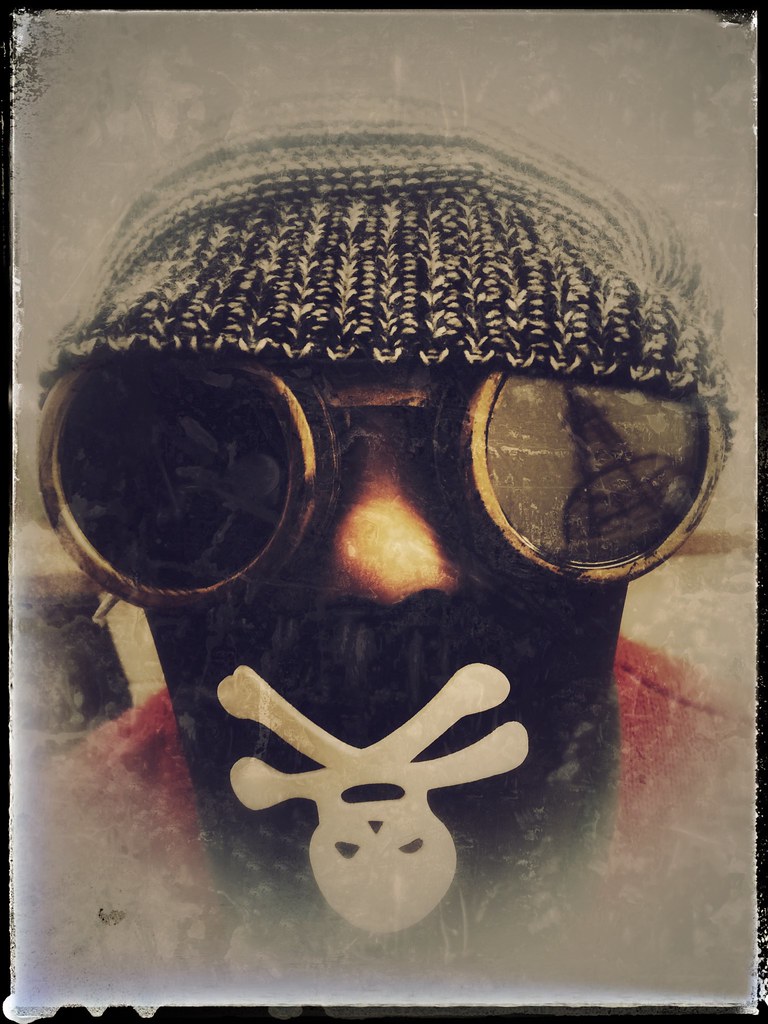 Apps used and backstory: This image was captured as my 9 year old son burst through the kitchen door with a plastic gun. He has taken to designing his own Steampunk and Post Apocalyptic styles. The image was taken on the native camera and edited in Snapseed. I blurred the background before raising the background brightness to add a degree of heat and mystery, before adding texture and frame to give it a feeling of the wasteland.

Based on a self portrait taken with iPhone 7plus. The image was created in Procreate with final adjustments made using Snapseed. 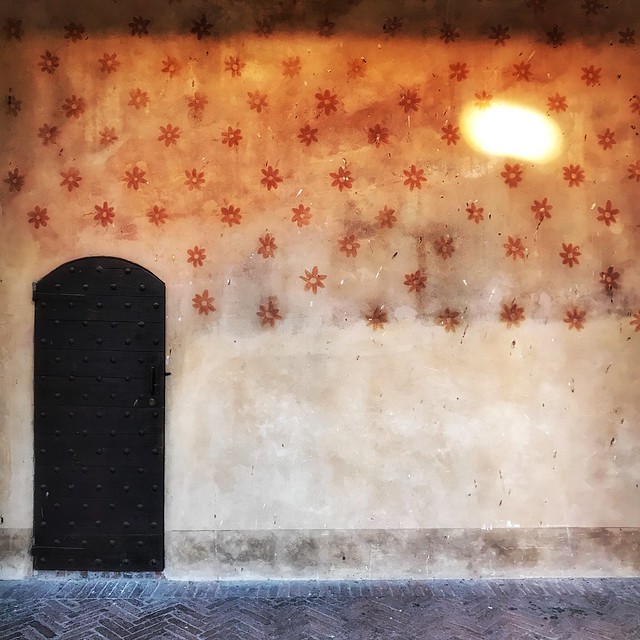 Going there by Tomaso Belloni

Apps used: I shot with the iPhone 7plus standard camera app and edited with Spanseed for basic enhancements. All he textures were already there, including the ‘vignetting’, provided by shadows on the top and wall painting on the right.
Backstory: I was walking in the inner yard of the Lower Castle in Marostica,Italy when I noticed in a sequence the wall, the door and the bright patch of reflected light. The composition was obvious. A black door to go behind the sun and the stars.