This week’s lead artwork, by regular iPhoneography Central contributor Kate Zari Roberts is a somewhat surreal forest-scape that takes on the texture of a tile or textile in the repitition of the tree shapes and the integration of subtle patterns in between. Its evocative and understated tones make for a visually soothing effect. 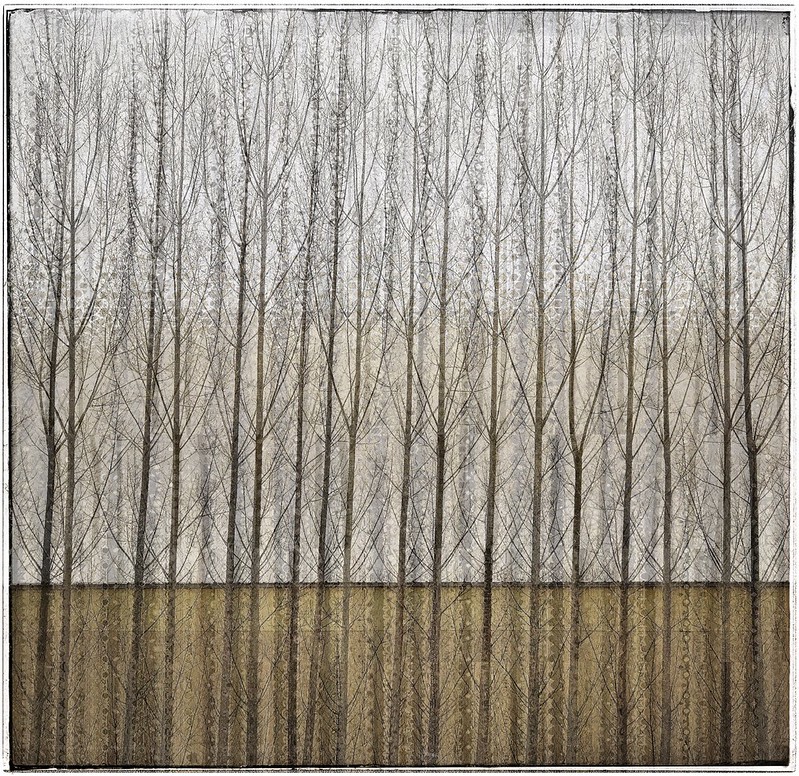 Apps used: Snapseed, Hipstamatic, iColorama.
Backstory: I’ve wanted to photograph these tress for years! I had the perfect grey winter day when I shot this. The image needed something after the first two apps so I went to iC, where magic can happen! 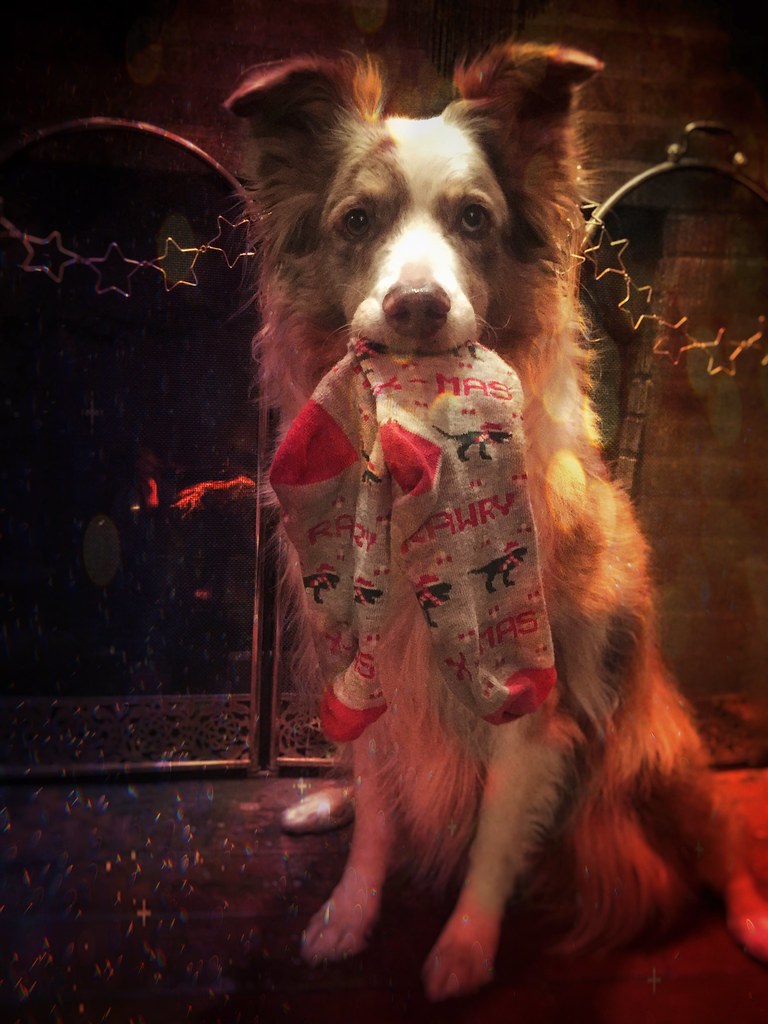 The Stockings Were Hung By The Chimney With Care … Soon to be brought down by the dog that was there. by Mandolina Moon

Apps used and backstory: Briar-Rose, my eleven year old Australian Shepherd is always a willing model. With this image I wanted a quick photo that would tell a holiday story. I didn’t have any props handy except my Christmas themed socks of T-Rexs wearing Santa hats. I chose our hearth with a fire burning (the fire is electric, but realistic) for the background, positioned BR in a sit, and asked her to hold the socks.

I snapped the shot, handheld, with my iPhone 6. I did some fine tuning in Snapseed – details, sharpening, glamour glow. My hearth is a bit plain and I wanted to jazz it up a bit. I looked for an app that would add some sparkle or texture and found it in Pixlr’s overlay, Frostlicious Lux, which added the sparkles, the bokeh and the red glow. I finished by using the eraser to remove a few bokeh from Briar-Rose’s pretty face. There you have it – quick and simple editing on the iPhone! 😉 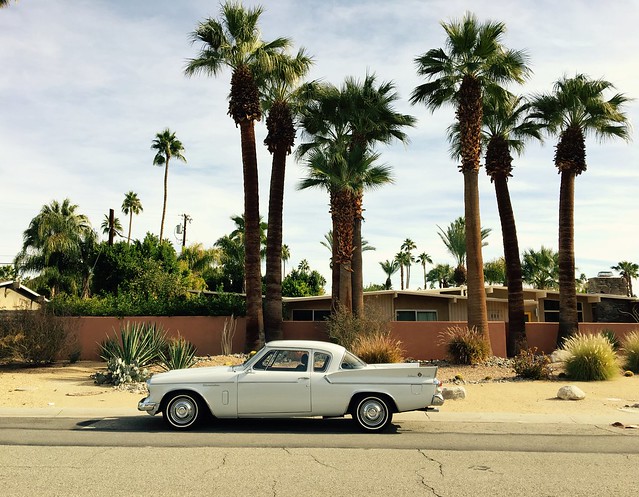 Apps used and backstory: I have always been drawn to old cars on the street – there is something about the design and lines of vintage cars that is very appealing to me. When I see a vintage car with an interesting back drop I usually slam on the brakes and start shooting away. This image spoke to me because I love palm trees and how they evoke feelings of warmth, vacations and relaxation. I shot this image with my iPhone 6s using the Camera + app and did some minor adjustments in the app using clarity and the fade filter. 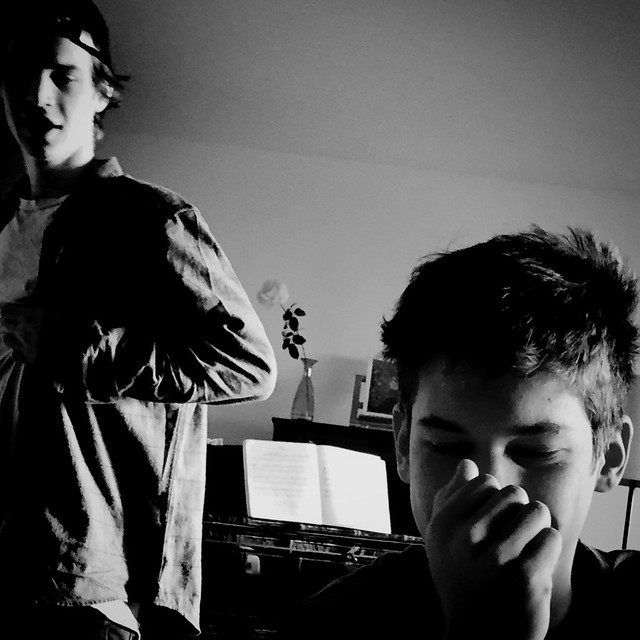 Apps used and backstory: The apps I used are not very interesting I have to say. For cropping and turning the pic from color to b&w I used the photo app (called Photos) – the one which is standard on your iPhone and you can’t remove. I used the Flickr editing app to enhance the contrast of the image and to add a vignette.

In the photo are two brothers; they are not alike at all but they do share the same memories. Somebody said something, their reactions are very different from each other but they know and count each other’s reaction without even looking at one another. In other words: they don’t show but they do share an bond you can’t describe. 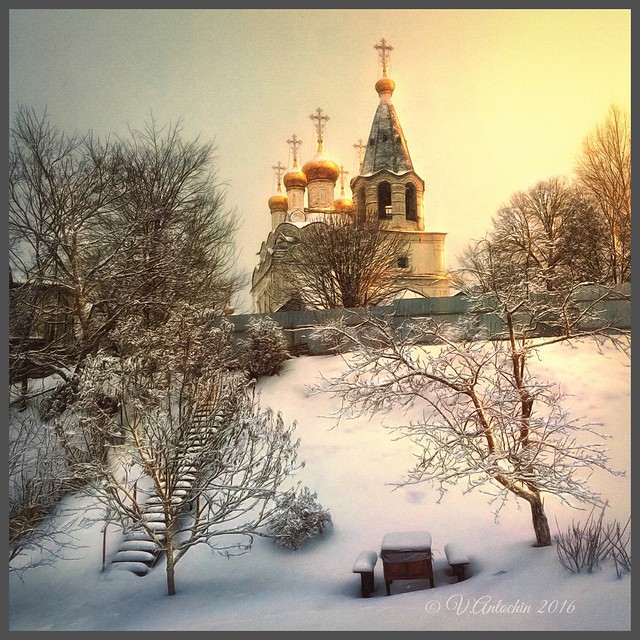 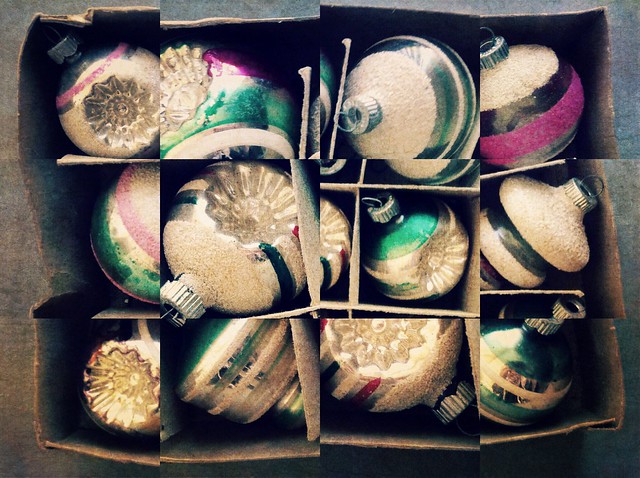 App used: Hipstamatic : John S Lens and Uchitel 20 Film.
Backstory: This image was taken in December, in a forest reserve near my home. It was early morning when I awoke to a dense fog. I have never been able to resist the impulse to make images in such weather. So I quickly drove to the reserve,( knowing all to well the evanescent nature of mist), and walked eagerly among the trees, capturing images which were veiled in the scenic disguises of the cold fog, at times, transparent, at times, opaque.

This image is filled with subtle contrasts and tones, and includes an effect of near/far layering through the placement of shadows and highlights. The in camera processing adds a lovely, vintage aura.

Apps used: Snapseed, Repix and ProCreate
Backstory: This image was taken at the Desert Botanical Garden’s Luminarias. The Mariachis were playing and one had this huge guitar called a Guitarrón. I snapped a photo with my iPhone. Later, I used Snapseed to adjust brightness and contrast. Next I used Repix to use the chalk, hatching, drip and dotter brushes. Finally I took the Repix saved image into Procreate to add layers and do more drawing/adjusting. Other than taking the photo with the iPhone, the adjusting and drawing were done on the iPad. 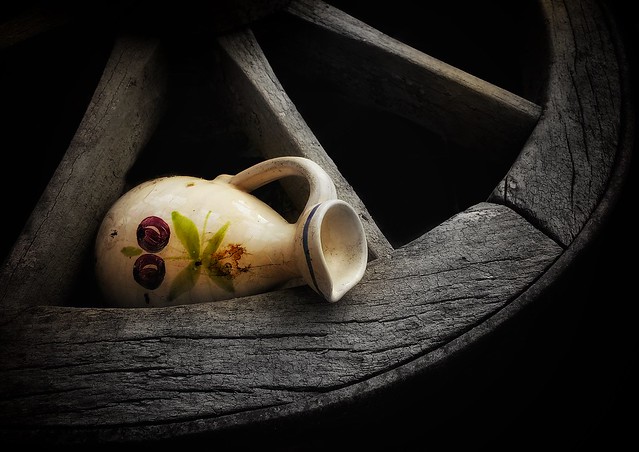 Apps used: Taken with an iPhone 6 plus and processed in Snapseed
Backstory: I usually love this kind of mood and now I tried do make something special with these two things because for me it represents a little bit of the magic of country life. When I made this composition I was thinking of my grandparents and all the beautiful memories. 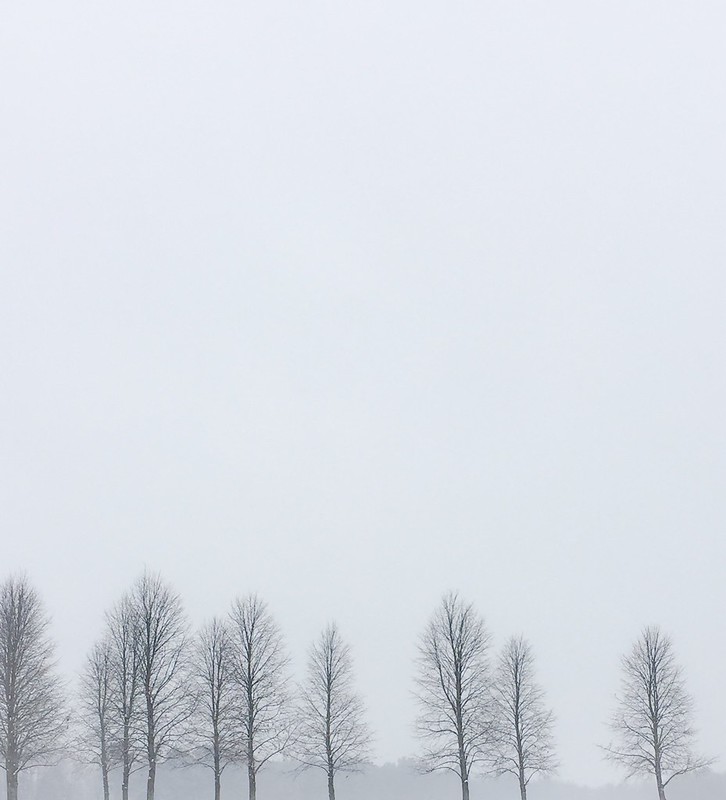 the place where my heart skips a beat by Allyson

Apps used and backstory: (iPhone 6 snapseed) We volunteered to lay wreaths for the vets that have served our country at the Saratoga national cemetery. Fresh snow had fallen, “virgin” snow, everything was white, and still, stark. I love black and white minimalism, the original image showed more of the ground but I wanted a more minimal look to it so I cropped the bottom off. you can almost feel the stillness in the air. 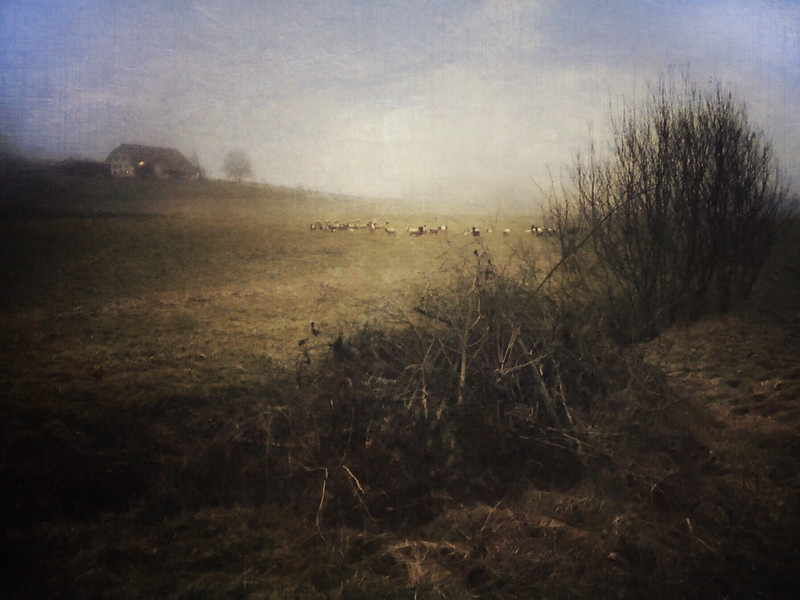 Behind the wood by Sarah Kuhn

Apps used: Snapseed, NoiseMaster, DistressedFX, Superimpose
Backstory: I was on my way home from work when I saw these sheep in the evening light. So I stopped, took a few pictures and enjoyed the peaceful atmosphere. Just a few minutes later darkness had come. Later on I optimized the image by reducing noise, enhancing the colours and adding a light texture. The image was intended to transmit the calm harmony of this cold winter evening. 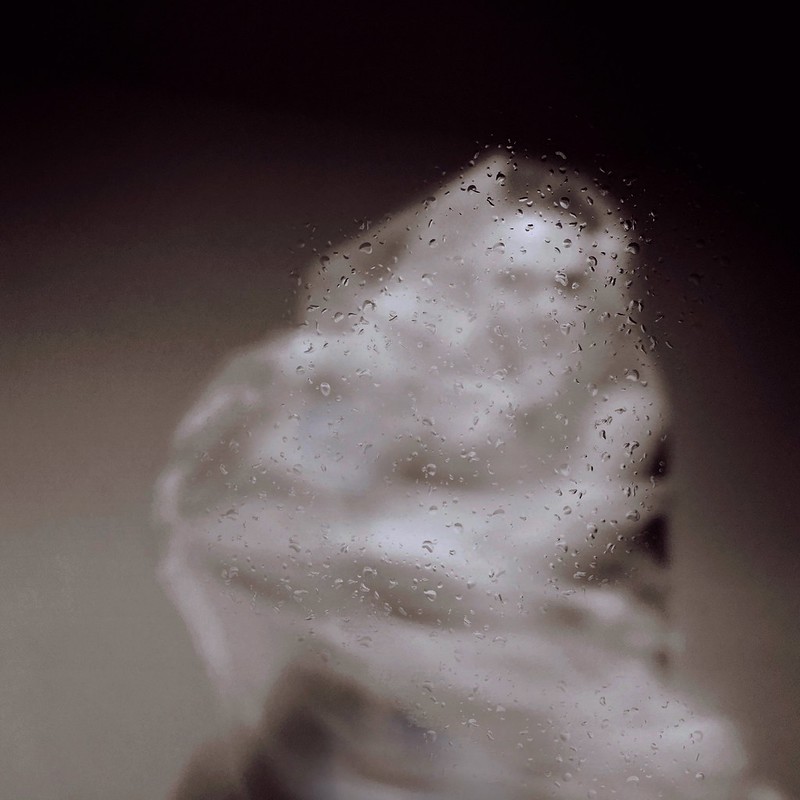 Apps used: Snapseed, Pixelmator and Repix
Backstory: I was doing an in motion series while wrapped in a white , transparent material . I like the idea of being veiled under the fabric and the way it went after the editing processes as it gives the idea of ethereal, mystery and vanishing dreams. The raindrops in some areas of the frame make the picture even more nostalgic, romantic and melancholically mysterious.