This week’s leading image is a beautifully crafted self portrait by by the seriously creative and super-talented Louise Whiting, so good she is that I included two of her images. I urge you to click on hers and any artists image that interests you to see more of their work on their Flickr streams.

Thank you, as always to everyone who submits to this group. I apologise now…and in advance for the short introductions. The next few months until August, I am working hard on various iPhoneography projects and intend to dedicate more time later this year to iPC however Apps Uncovered will continue to publish our favourite 12 images of the week from the iPC Flickr group. – Don’t forget to check out the best of the best in our Top 40 Apps Uncovered images from 2014 selected by Bob Weil and yours truly.

Apps used and backstory: Self portrait taken with the native iPhone 6+ camera. I love movement in portraits, I’m always drawn to experiment to try and capture that, this was one of many I took last weekend. Very simply edited using Mextures. 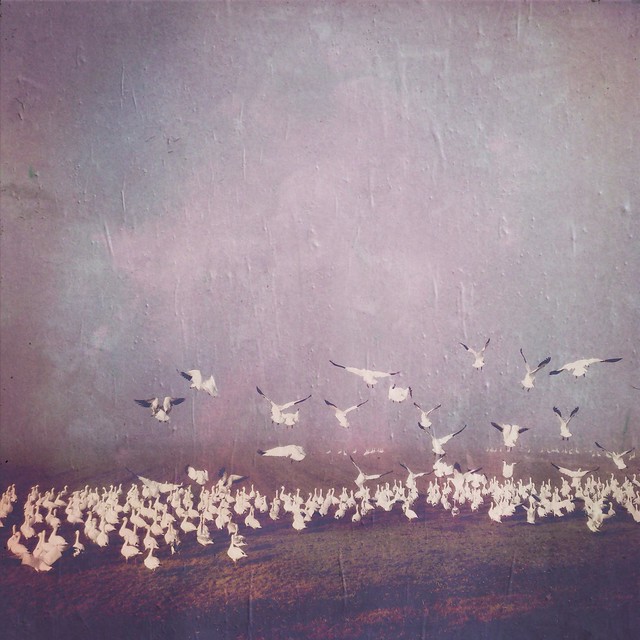 Apps used: This image was taken with Oggl – Madalena lens and Blanko 1 film.
Backstory: I shot it along a stretch of open road in a rural farm area where these snow geese happened to be resting. Fog had settled in the valley, allowing only minimal visibility, though the sun was shining just beyond these fields. The geese were all standing quite close to the road – a few honking and rustling about, but most just quietly going about their business

Apps used: hipstamatic HandyPhoto facetune mextures superimporse PhotoPower LightBoxr
Backstory : I wanted to take myself looking out the window. I chose the location in which the window has lace curtains.
it was clear noon in winter. the sunlight was gentle.
I use a small tripod and iRemote shutter to take a photo. and I cared not to spoil the original image when I edited it. 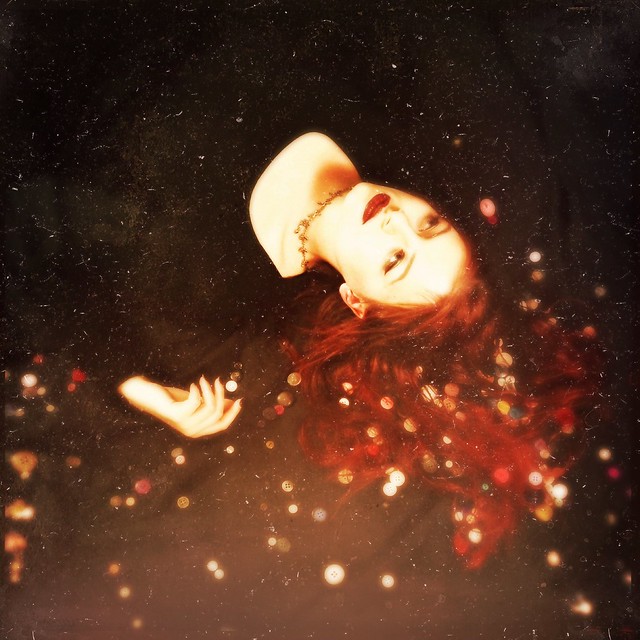 Apps used: This photo was taken using Hipstamatic’s Oggl – Loftus lens with DC film. I then edited the image gently using Mextures for grain, texture and additional tone.
Backstory : The inspiration came partly from the movie Coraline – a family favorite we’d watched that night. Buttons, specifically as eyes, play a big part of the story in Coraline. I went a little more abstract here and created a galaxy of them, originating in the model’s beautiful red hair. We just so happened to have a big jar full of buttons on hand!. I used a black background to go with her simple black dress, and lit the room with soft studio lighting. 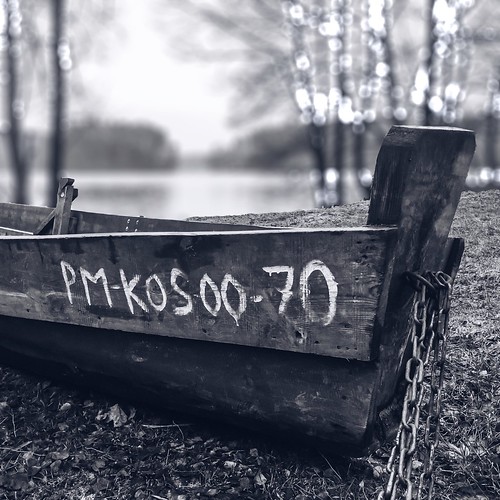 Apps used: Processed with VSCOcam with a5 preset 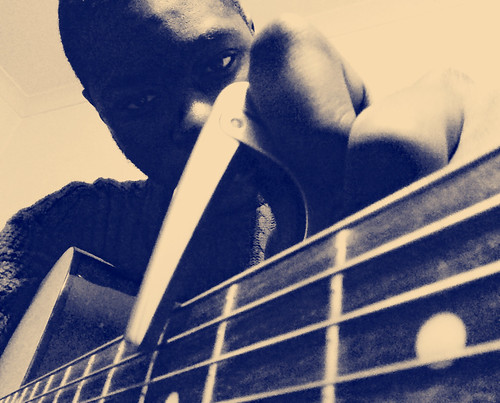 Raising the key. by Oluwadamilare Fajinmi

Apps used: Native Apple camera edits and Tadaa.
Technique: To shoot this photo I set my iPhone 5C on a timer whilst I carried out my pose of putting on a capo onto my guitar. I used two filters for this photo: one of the iPhones native black and white filters and a filter on the app Tadaa called Kraftwerk. 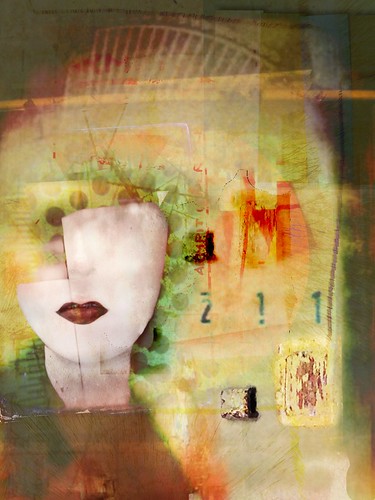 Apps used: I go back and forth in ImageBlender and RePix to mask or isolate certain elements, then to Snapseed to tweak and finalize the complete work.
Backstory: Actually, I was reminiscing about my life as a young artist in Toronto in the mid 70’s. During that time a musical duo called The Time Twins were doing the rounds at bars in the area and I very much liked their brand of alternative rock.

In this work, I tried to recreate the sounds and spirit of that era. To me it’s a very musical piece because of the colours and blended elements.

My process usually consists of what I term: Improvised tensions. That is: I start with an element, this time the abstracted face and then allow myself to add, subtract, construct and deconstruct without judgement until a story unfolds. Once I see a type of uniformity, I become more selective with my blends as to justify the metaphorical requirements to myself. I call this juncture of the work; The ‘eureka moment’ or the ‘ahaa’ moment when chaos and reason collide.

Apps used: ProCamera8 to shoot, editing with Filterstorm Neue.
Backstory and process: This image was captured during a recent trip to the New England Aquarium with my family. The original color image had a strong blue hue due to the lighting in the tank. I shot this with ProCamera8 and then brought it into Filterstorm Neue for all of the post-processing. In converting to B&W, I used Filterstorm Neue to convert all of the blue background to stark white by raising the blue levels and dropping the red and green during the conversion process. I then made basic contrast and curves adjustments to achieve the final image. 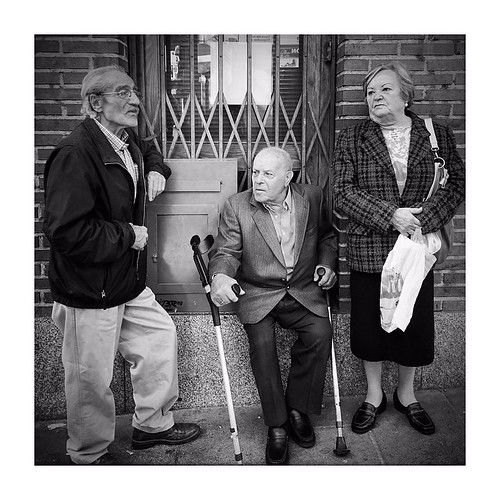 Apps used: The image was shot on an iphone 6, using Hisptamatic (Jane lens + BlacKey SuperGrain film). I used FrontView to straighten the vertical lines and adjusted light and contrast with Snapseed and Filterstorm.
Backstory: I normally stroll the streets of Madrid with my iphone on, ready to shoot if I see a scene worth capturing. When it comes to street photography, I always use Hipstamatic. I love how the pics look like using the combo described above. I just saw these three old people standing by the wall, doing absolutely nothing, maybe waiting for someone or something to happen. I loved the composition of the scene, the faces of these three people who seemed not to know each other I just stood in front of them, pretended to do something else (as I always do when I shoot pics of people from such a close distance) shot and walked away inmediately afterwards.

Apps used: Camera+ (Macro setting), Perfectly Clear, VSCOcam (J5), Snapped (Center focus & Tiltshift)
Backstory: Walking in an open field, I found a lone milkweed plant with a single pod that had burst open and was filled with white seedlings. I was surprised to see such a display, as it was mid winter. I had always loved the gossamer fragility of the seeds,delicately clinging to the host plant yet destined,inevitably, to be blown away. It was very cold and the winter wind was ravaging the pod, causing it to sway almost without rest. The sun was clouded but still bright enough to keep the ISO low and the shutter speed high enough to stop most of the plant’s motion. I must have spent half of an hour happily watching the beautiful gestures of the seedlings while I switched thru apps,changed positions and snapped off shots when the composition and lighting seemed right.

I even returned to the spot the next day. But the milkweed seeds were gone.
This particular image was the result of a closeup shot using an iPhone6 and the macro setting on Camera+. Using this combination gave me good detail where it counted and some lovely bokeh.
I post processed the photograph first in Perfectly Clear. Then I ran the image through Vscocam, J5 preset, while making basic adjustments such as exposure,contrast etc. Finally, I processed the image in Snapseed, using center focus and tilt shift to enhance the bokeh blur.

Apps used: Snapseed, ArtStudio, VintagePhoto, DistressedFX
Backstory: Self portrait taken with the native iPhone 6+ camera. I love movement in portraits, I’m always drawn to experiment to try and capture that, this was one of many I took last weekend. Very simply edited using Mextures. 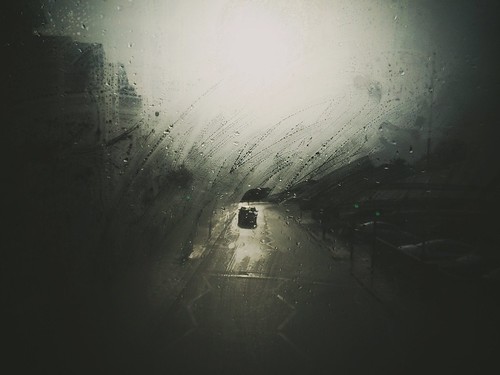 Apps used: For this particular shot I’ve only used the Brooklyn filter from the Flickr app.
Everything else was there.
Backstory: One very cold and misty morning, I was riding on a double decker bus in Enfield Town.
Because the windows were all steamed up, I could hardly make out where about I was. It was a weird, yet nice confusion.
So I photographed this confusion.
This is how the “ghost rider” series of shots came to be.