Welcome to another this week’s Apps Uncovered, our weekly feature, showcasing iPhone art and photography from around the world. Once again, due to iPhoneography work committments, spreading the iPhoneography love via Adorama TV’s learning centre in my debut video “An introduction to iPhoneography basics”, I will be keeping it short and sweet for this and forthcoming week’s features. Thank you to Brandon Kidwell for providing us with such a stunning lead image this week with beautifully executed composite “Friends”. I am delighted to announce that my good friend and iPhoneography partner, Bob Weil will be back next week with a fresh new selection for Apps Uncovered. 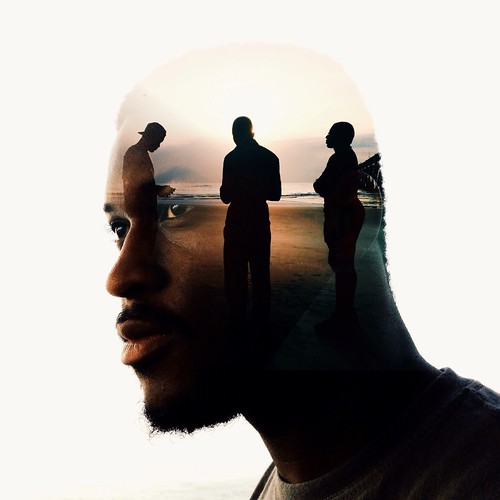 This image is a blend or double exposure of two images taken on an iPhone5 and edited with Union App and VSCOCam.
This image is dedicated to a group of friends that I’ve met through photography here in Jacksonville. The first image is a friend Malcolm that is a true ambassador to our great city. Blended within is a shot I took of Malcolm, John and his brother discussing life, music and how small the world truly is just before I went surfing at sun up and before we all grabbed breakfast, said goodbye and went our separate ways for the day.
Both images were taken with the native iPhone camera, blended in Union App and finished off in VSCOCam for the great tones and coloring. 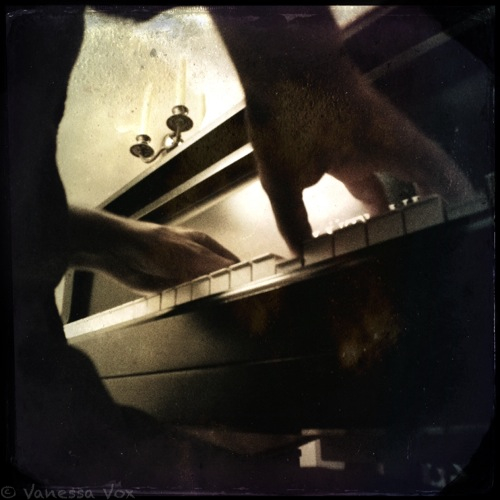 Under the shoulder shot by Vanessa Vox

Backstory: Imagine you are a two year old child watching your father who plays the piano. You lean against his warm body. You are surrounded by his music and fascinated by the hammering fingers. The tunnel perspective which leads from the dark to the light (candlestick) is also a metaphor for the admiration of a layman who is impressed by the abilities of a master. The way to perfection is long and the light of mastership is far away.

As a photographer I am always attracted by the performing arts. And I try to catch intimitate pictures which are not intentionally set to scene. I prefer spontaneous shots. In this special case I have chosen a combo which emphasizes the contrast and the look of a natural light. 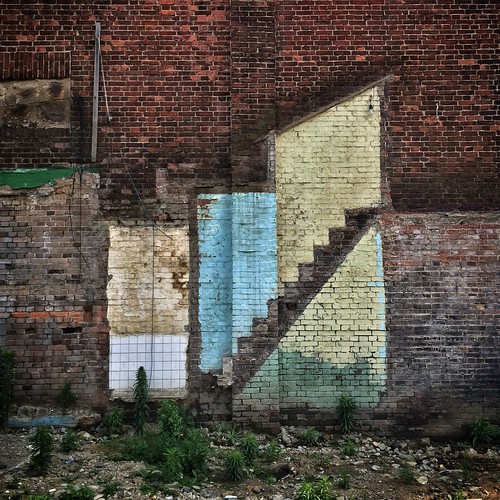 the unintentional poetry of an old brick wall…Mokpo, Korea by Joseph Cyr

For this scene, I used the PerspectiveCorrect app to straighten the bricks’ vertical lines a bit, and then Snapseed’s “details” option to bring out the wall’s texture.
Earlier this summer, I spent a month traveling around South Korea, and toward end of my stay, I decided to spend a couple of days in the city of Mokpo, a port on the SW tip of the country–one section of the country that I had never before visited. The old center of the city is full of architecture from the Japanese Colonial period (1910-1945), some of it being preserved, but lots of it in varying degrees of photographically-interesting decrepitude. It was an incredibly muggy afternoon, and after a morning of hiking, I had just finished a lunch of the local specialty, octopus soup, when I walked past this wall around the corner from the restaurant. I was immediately struck by how aesthetically pleasing the proportions of the differently colored sections of brick and tile were–pleasing, and yet completely unintentional: the outline of what once had been a staircase, the weeds growing luxuriantly in what had once been an adjacent building… What gets built, what gets torn down, what gets left behind, what is deliberate versus what is spontaneous–so much goes into building a city, into deciding how to relate the history of a place, into considering what’s worth keeping and commemorating or what should be forgotten…Korea’s 20th-century history has been such a fast-paced combination of painful humiliation followed by dizzying, breathtaking modernization; the seaside city of Mokpo illustrates all of that in such a compact space, and this particular wall, to me, seemed emblematic of it all. Three days later, I flew back to the U.S. 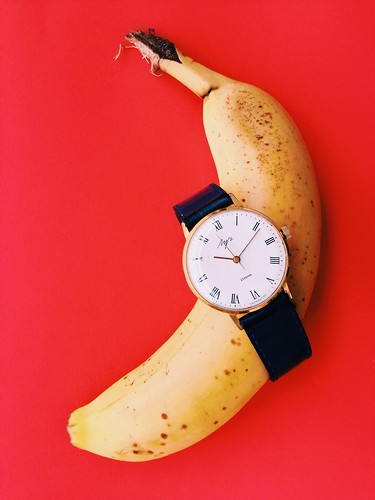 Drive out of lake Como #222 of 365
Another iPhone shot.
View from California Pass
Taken in 2012 while Jeeping off-road in the San Juan Mountains in Colorado. I used ProHDR to capture the image, and Snapseed to edit. It’s not hard to capture a great image with scenery like this!

This image was taken last December while scouting the local area for photo opportunities. It had snowed ,a day or so before, but the roads were clear and the air pristine. I saw this private fishing lake and small cabin with dock, which contrasted wonderfully with the surrounding snow covered landscape. The barren black tree line added more visual impact. The feathered clouds were in motion and dramatic. The dark,empty highway,like an endless black ribbon, curved off into what seemed an infinity ; it all spelled winter for me. I wanted a minimalist image and the composition had to be such that this feeling was enhanced.
I used Hipstamatic Oggl; Lucifer Lens & Rock BW film. I did some conservative tonal processing in Vscocam. 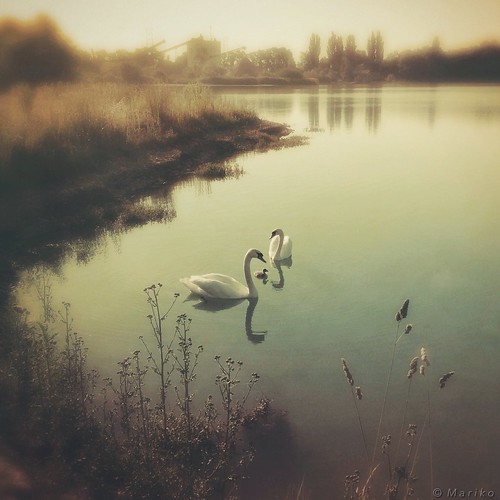 We Are Family – 2 by Mariko Klug

Since I got my dog 5 years ago I come almost everyday to this lake. I’ve taken many pictures of swans since then but this was the first time I saw a family with a baby swan. It was a very calm morning and the swans were enjoying the peace. I tried not to get too close as I didn’t want to disturb them. The baby swan looked so well protected between its parents.
Photo was taken with Hipstamatic Sergio lens, Blanko Freedom13 film, no flash, edited with PhotoToaster, Camera+, Mextures and VSCOcam. 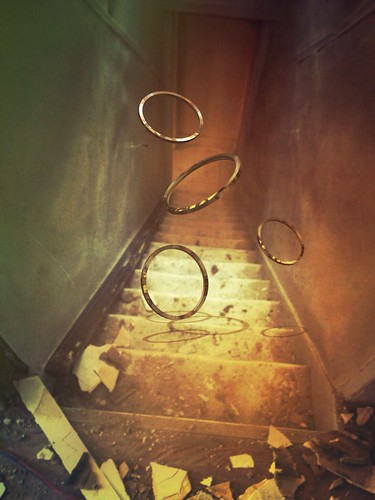 Circles in the crime scene by Aldo Pacheco

Circles in the crime scene

I friend of mine invited me to visit an old house he is remodeling, and I think it was the perfect time to visit it. It was almost in ruins and he was demolishing the walls., I found the stairs down to the basement so dusty, forgotten and dirty, and it reminded me of an old photo I took of some stairs in almost in the same situation that I named “the crime scene” (scene that I’ve been looking for years to shoot again). Anyway, my initial intention was to get the shot with a shadow by the far end, so the “crime scene” will be perfect for my idea.

I started with Snapseed to “prepare” the photo for the next step adjusting the brightness, contrast, saturation, shadows, vintage, grunge and retrolux.

The inclusion of Matter app was as an experiment. I played a little with the circles and shadows to get the idea of a puzzle’s clue to solve the mystery. There are 4 layers; one circle on each layer.
Finally. I used Mextures to get the dense, dusty and foggy atmosphere and complete the scene. 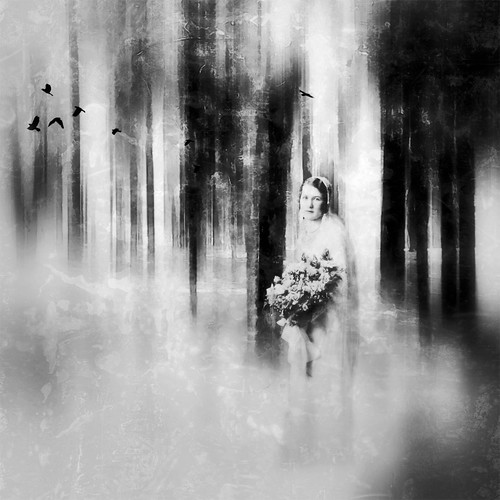 This image was created using the apps Photofx Superimpose, Snapseed and Distressed Fx. The enchanted mysterious forest theme is a favorite of mine. I like to create visual stories/fairy tales by superimposing various images within my forest sanctuaries. This image is of my Aunt Janina in her wedding dress. I edited the forest in Photofx and Snapseed. I used Superimpose to add Janina, back to Snapseed for some texture and tweaking, and then to Distressedfx to add the birds. I will leave the story open for interpretation. 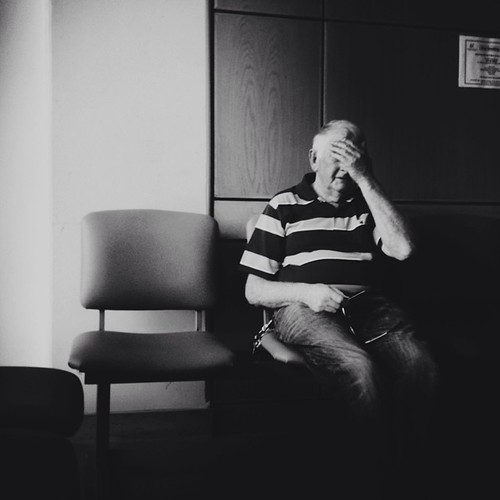 It was taken with Hipstamatic (Jane & BlacKeys EF), Then I straightened it with Filterstorm Neue and then finally underexposed it in VSCO with the B5 filter.

I took the photo when I was visiting someone in hospital. I was sitting outside the ward when this man came out from a coronary care ward and was pretty upset. I’m not sure of his story but I can really empathize with him as I’ve been in the situation quite a few times over the years.

I was in Brighton for the day taking photos with my son Toby and as we were heading back home he pointed out these two men. They seemed quite serious about what they were doing and the piano player was being hassled by a group of men sitting drinking outside a pub on the opposite side of the road, they were calling out and laughing, the man with the eye patch kept glaring at them! The piano was sitting on wooden blocks and was in quite a state of disrepair which added to the scene!
I processed it with VSCOcam b5 preset and Snapseed. 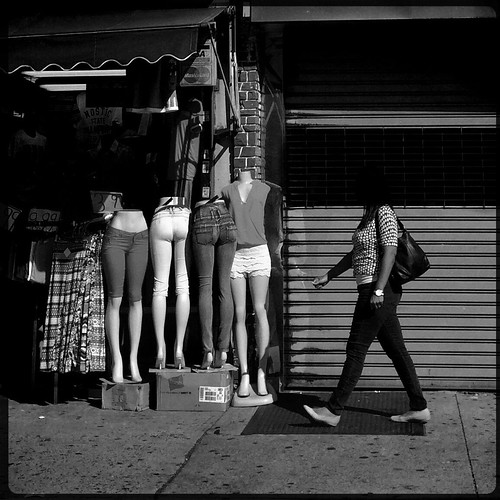