This week, as November took over the landscape, I was drawn to slightly darker images, whether by tones or mood, as the opening seemingly innocent image by Lydia Cassatt shows. And please… remember that if you don’t have your photo sharing turned on in your Flickr settings, your images cannot be featured. 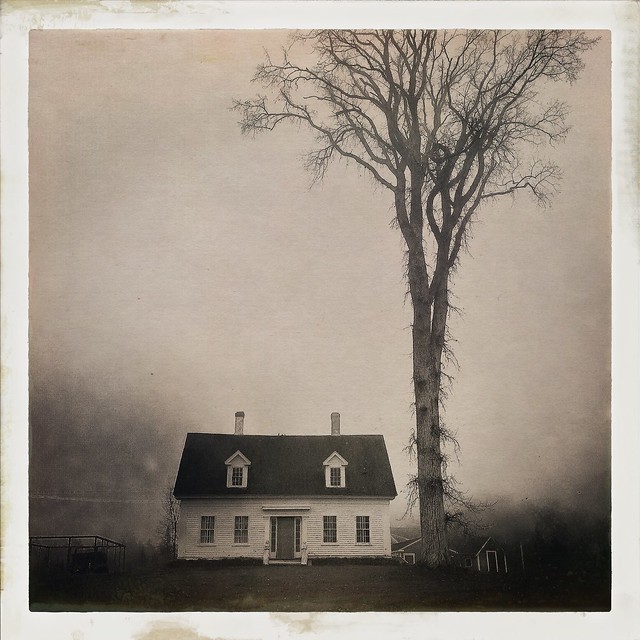 Apps used: Hipstamatic combo is John S Lens, Uchitel Film, and Standard flash. Back Story: I did a series of square images of places around my town, mostly captured on walks. This house a wonderful example of Maine architecture, the Cape. The tree is a American Elm and it is one of the last ones standing due to Dutch Elm disease. I photograph it constantly and this was one of those great, foggy days. 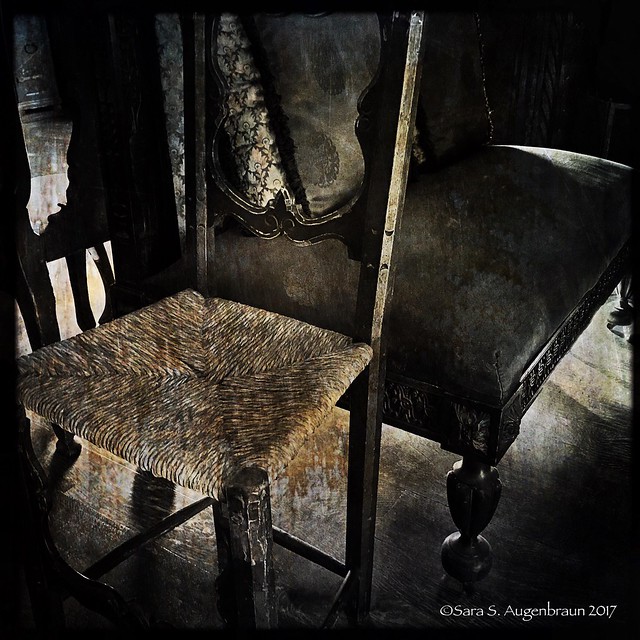 Apps Used and Backstory: On a rainy day last month I visited the Isabella Stewart Gardner Museum in Boston, MA. This unique museum contains a collection of European, Asian, and American art, including decorative arts. I found the atmosphere of the museum to be rather dark and heavy with very little lighting other than some window lighting. Among the decorative arts displayed are lovely wooden chairs, with carvings and/or old upholstery. Two particular chairs attracted my attention because of the stark, overcast yet beautiful window light that hit the wooden floor and climbed up and around the legs of each chair in a lovely highlighting effect. I felt monochrome would best evoke the atmosphere, so I used the Jane Lens and BlacKeys Supergrain Film of the Hipstamatic app on my iPhone 7Plus to capture the shot in BxW. Later I processed it with Snapseed, DistressedFX and Phototoaster apps to add contrast and texture and a slightly stained look to the image. 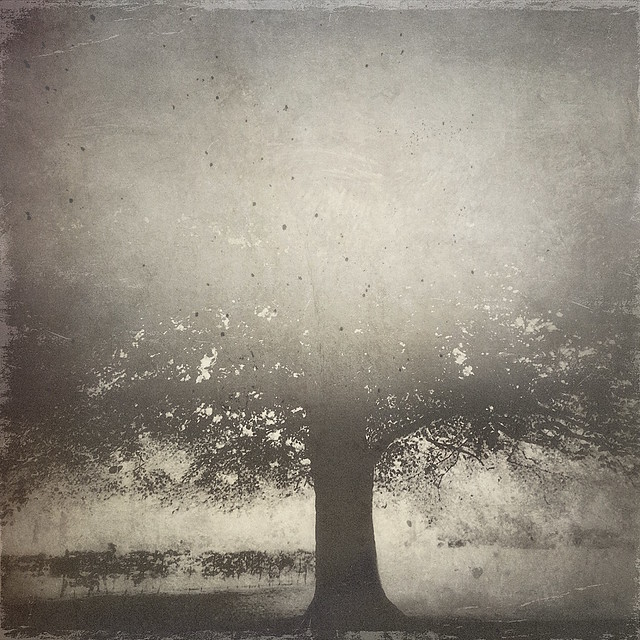 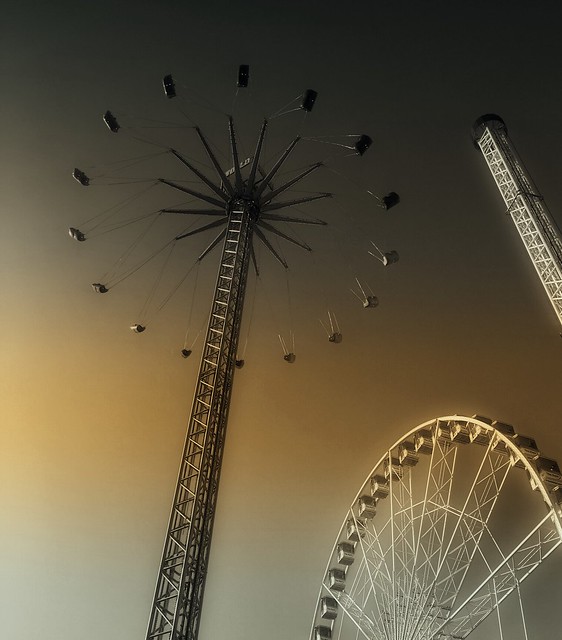 Apps Used: I used the apps Snapseed and IColorama for the final image.
Backstory: I took the photo while spending 5 days in Amsterdam during a recent 5 week driving trip through Western Europe. There was a carnival in Dam Square during the time we were there and I tried capturing the structures against the sky from different angles. 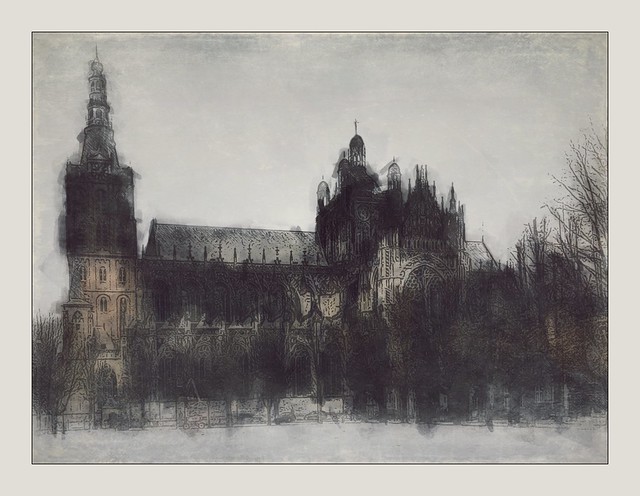 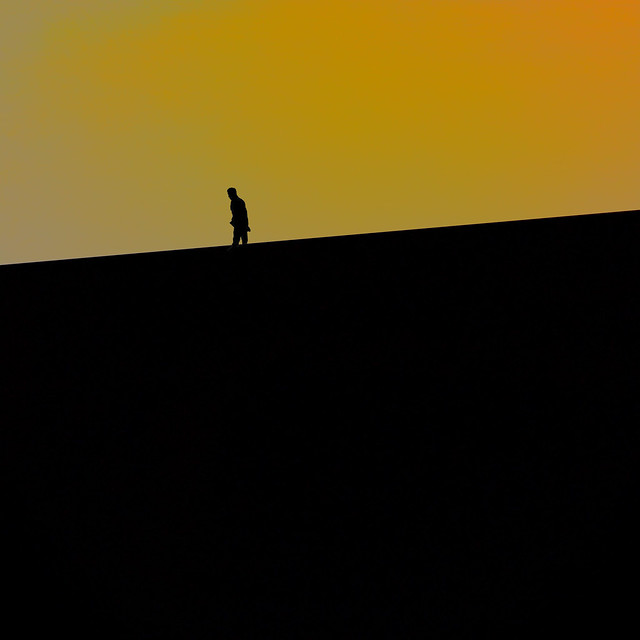 Apps used: This was a fairly simple image composed principally in the app Superimpose. It consists of a black field made by photographing a black surface, then duplicated and rotated to make it a dense solid black. The upper yellow field is a photographic wall texture imported into Superimpose where I adjusted the edge with a gradient tool, adjusted the opacity, and tweaked the RGB fields to achieve the right color balance, then added the silhouette from a set of masks I maintain within the app.
Backstory: This is one of a series of images that challenges our sense of perspective and frame of reference through the use of optical irony in the fashion of the great French illustrator Guy Billout. In fact, the original “Seeing” series contained no human figures and relied solely on spatial contrast, shading, angles, and negative space to force the eye to choose between one of several perspectives the images create. The use of the human figure was a follow on series to the original and was merely an attempt to explain the visual contrasts to some who reported not seeing the differing perspectives. In “Seeing : 3” for instance, do you observe the figure from below as he is looking down from a ledge, or do you observe him from behind him looking over a ledge? Both are valid observations, and the viewer is forced to consider a perspective that, while entirely valid for another, may not be the first perspective they see naturally. 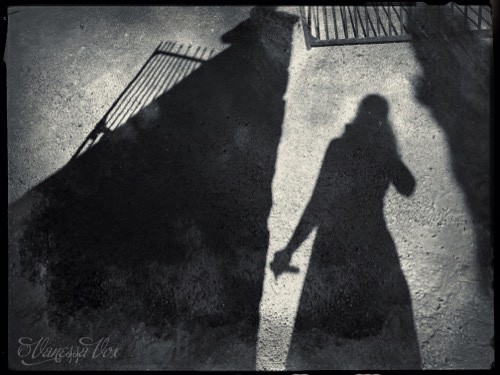 Apps used: Hipstamatic Cam, iColorama Backstory: I live in a region where the sun dominates the scene very often. Sometimes there is too much brightness and I am longing for the night when big shadows overwhelm the landscape. But also during the day when the sun is behind my back, I keep an eye on all these moving shadows which appear here and there and follow me on old stone walls and streets. They seem to tell me stories about another life beyond the daily routine. They tell stories about things happening in another world. I remember that I was always fascinated by early German expressionism movies. They played with shadows to create a surreal vision somewhere between reality and human fears. But in my series ‘Shadows alive’ there is more than fear. There are also dancing bodies and stories of corresponding souls. And sometimes the shadows communicate with the real world and the real things. But what is real? 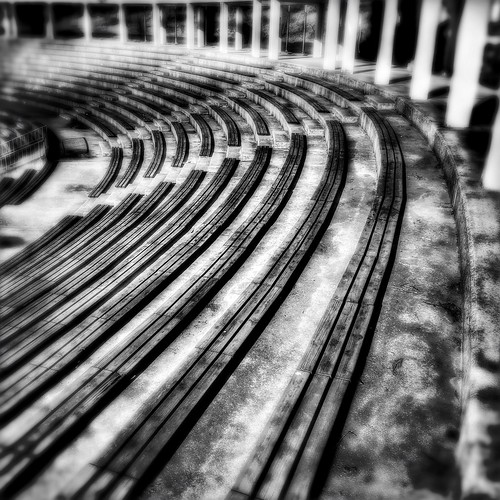 Apps used: I shot with an iPhone 6 default camera, applied basic editing in Snapseed, then edited with Hipstamatic (Anne-Marie Lens and Artistotle film).
Backstory: I found this photo from 2015 going through my iPhone archive and was intrigued by the pattern made by the amphitheater seats and columns. A black and white version of the photo gives a sense of emptiness and desolation. 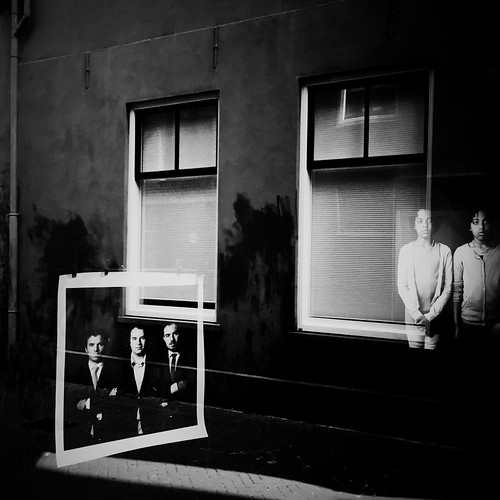 Apps used: The image is as shot, I didn’t crop or do anything to it. The app I used to take the photo is called Provoke. Backstory: I was in Delft, which has a beautiful old city center, to shoot and visit a museum. I was walking some little back streets, when I noticed this reflection in a window. There were some large prints in the window of a photographer’s shop, reflecting in the windows of an empty building across the street. I took a couple of shots, of which I liked this one best. 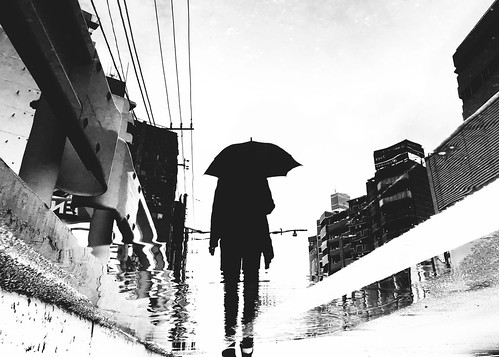 Apps used: Snapseed
Backstory: ‘End of the line’ was shot in Fudomae, Tokyo. There’s a slight slope towards the road and at the bottom there are lots of puddles after it’s rained which are great fun to shoot. In Snapseed I used the noir filter to give the image a darker feel. 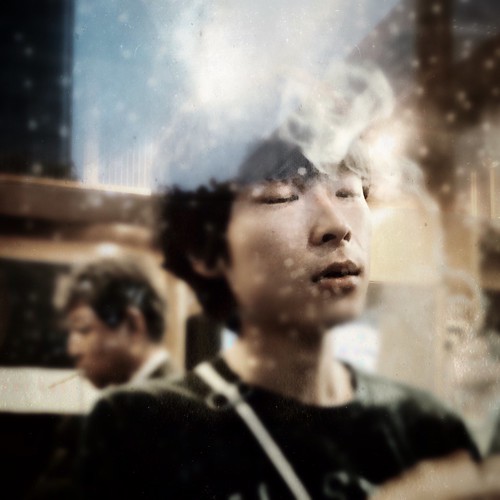 Apps used: Hipstamatic, Superimpose, Snapseed
Backstory: ‘Recalibration’ is the second installment in a series I am currently working on. Each entry in the series is a candid photo taken through the same window as I try to capture a specific mood unique to each subject and set using the varying reflections offered by the window from different angles and at different times of day. It has been an interesting exercise as I was never comfortable shooting faces from close proximity; and it doesn’t get much closer than this. 😉

The first five images of this series are currently at the top of my Flickr stream and I invite anybody interested in seeing them as part of the whole to come and take a look.

I captured the image using Hipstamatic. Wanting to gain a little more depth and ambience, I then ran the unaffected file through the Hipstamatic app three times, using a different lens/film combo each time. I took those files and blended them to suit my tastes in Superimpose before making a few final adjustments in Snapseed. 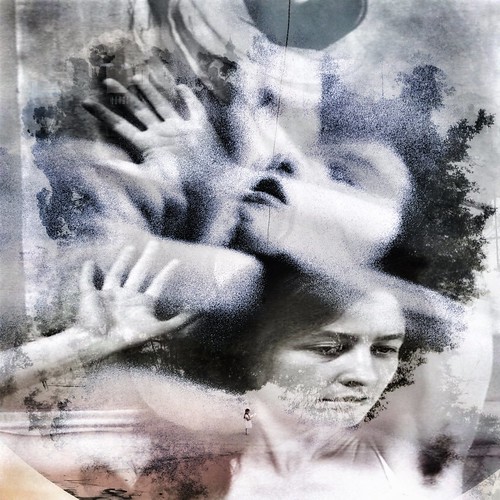 Apps Used: It is a digital collage of photographs taken with the Hipstamatic app on the iPhone 7 and images that have made the story of photography and I love it very much. The images were mixed and fused using SuperImpose in several subsequent steps. Once the desired composition is obtained from me, I have reshaped colors and grain with Snapseed.
Backstory: My image selected by you is part of a series inspired by the book of French semiologist Roland Barthes “A Lover’s Discourse: Fragments”. The series wants to create images that evoke dreams, desires, fears and memories from each of us when he was in love.